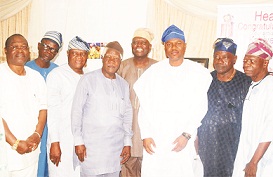 By Adekola Afolabi
|
The Olowo-elect, Prince Gbadegesin Ogunoye, has promised to make his reign very impactful on the people of Owo Kingdom and ensure all-round development in the ancient town.

Prince Ogunoye specifically promised to make youth employment a priority through the encouragement and support for the establishment of small, medium and large scale industries in the town to reduce youth unemployment.

He spoke yesterday while receiving members of Klub 20 led by its president, Dr. Kola Ademujimi, who paid him a courtesy visit in Akure, the Ondo State capital.

The Klub members congratulated him on his recent selection as the new Olowo, his appointment as Permanent Secretary and also on his birthday, as a member of the Klub.

Prince Ogunoye revealed that the wide jubilation that followed his successful selection was a clear indication that Owo sons and daughters really wanted him as their king, assuring them of massive development under his reign.

“It is a new dawn in Owo Kingdom and it is a new beginning. My reign will usher in peace and tremendous development,. Our youths” he said.

He also noted that he was aware of the expectations of the people of the kingdom and promised not to let them down, just as he solicited the cooperation and support of all to develop the kingdom and the state at large.

According to him, as a true son of the soil with vast knowledge of  the culture and traditions of Owo Kingdom, he would always preserve and showcase the rich cultural heritage of the town to the outside world to improve the economy of the town.

He particularly appreciated all members of the Klub 20 including past executives and promised to be their good ambassador and as well continue to be a functional member of the Klub all its ramifications.

Earlier, the President of Klub 20, Dr. Kola Ademujimi, commended the state governor Arakunrin Oluwarotimi Akeredolu, for appointing Prince  Ogunoye as Permanent Secretary in the state public service before finally ascending the throne of his forebears.

“Our visit is therefore to rejoice with your Royal Majesty on these numerous achievements all within the seventh month, a month of perfection indeed. We are happy to note that our Kabiyesi has been the first Permanent Secretary and the second lawyer to have become the Olowo of Owo Kingdom.

“We pray that God will empower and enrich you with wisdom, strength, good health and other resources that will make your reign more peaceful, progressive and prosperous as the Olowo of Owo Kingdom than that of  your forefathers, ” the Klub President prayed.