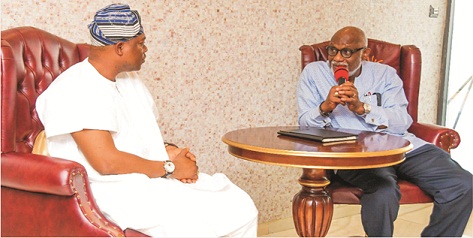 By Adekola Afolabi
|
The Olowo-elect, Prince Ajibaderinwa Gbadegesin Ogunoye, has visited the Ondo State Governor, Arakunrin Oluwarotimi Akeredolu  with a promise to make his reign very impactful on the people of Owo Kingdom.

Prince Ogunoye who led other members of the royal family on the visit particularly appreciated the governor  for his neutrality throughout the selection process.

He revealed that the outcome of the selection process  clearly showed that the people of Owo kingdom really wanted him as their king, adding that the kingdom would experience massive development under his reign.

According to him, the massive reception given to him by the people of the ancient town after his emergence was an indication that he was widely accepted by Owo sons and daughters. He promised not to let the people down and  offer selfless leadership.

Prince Ogunoye  who promised to give youth empowerment a priority in order to curb youth unrest, equally solicited the support of the governor in that direction to further ensure peace and development of the kingdom and the state at large.

He assured the governor that as a true son of the soil with vast knowledge of  the culture and traditions of Owo Kingdom, he would always preserve and showcase the rich cultural heritage of the town to the outside world to improve the economy of the town.

Governor Akeredolu  congratulated him and the entire people of Owo Kingdom for the peaceful selection process  which culminated in his peaceful emergence.

Akeredolu noted that the selection process has shown the whole world that the people of Owo could truly conduct selection of their  Oba without rancour, describing the development as historical.

The governor, who gave God the glory for making everything peaceful and successful, also said the outcome of the selection was a reflection of the people’s  choice and an eloquent testimony of his popularity and acceptability among the people.

“Your people, our people love you and they have shown it. The joy that greeted your selection spoke volumes  of the fact that the people of Owo have made a good and popular choice. I want to thank God for your life,” he stressed.

He assured him of the readiness of his administration to give necessary support to all his good programmes for the development of the people and the Kingdom.

Akeredolu who said he was happy that  the Olowo-elect is very familiar with the culture and tradition of the ancient town, further urged him to preserve the rich cultural heritage of Owo Kingdom.

He also described the Olowo-elect as a civil servant with high integrity, promising to work with him to make his reign peaceful with a lot of monumental achievements.

Akeredolu urged him to focus on youth empowerment to reduce  unemployment and prevent youth unrest in the ancient town.