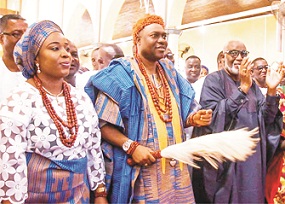 By Adekola Afolabi
|
The Olowo of Owo Kingdom, Oba Gbadegesin Ogunoye, yesterday led members of his family, friends and associates as well as Owo sons and daughters in a special thanksgiving to appreciate God for his hitch-free presentation of Staff of Office.

The Thanksgiving held at St. Andrew’s Cathedral, Imola, Owo, had in attendance the state governor Arakunrin Oluwarotimi Akeredolu, among other dignitaries.

In his sermon, Bishop of Owo Anglican Diocese, Rt. Rev’d Stephen Fagbemi, called on Owo indigenes to always cooperate and support the monarch to enable him take the ancient town to a greater height.

The cleric  assured Oba Ogunoye of the church’s continued prayers and support to make his reign peaceful and full of development.

Highlights of the thanksgiving were presentation of gift to the monarch and special prayer for him, his family, Owo kingdom and the entire state.

The new Olowo of Owo, Oba Gbadegesin Ogunoye, was on Saturday presented Instrument of Appointment and Staff of Office by the state governor, Arakunrin Oluwarotimi Akeredolu.

The governor who rejoiced and congratulated the new Olowo of the historic occasion, also informed the army of invited guests from far and near, Owo sons and daughters that graced the occasion that the spontaneous excitement and jubilation that greeted his emergence as the Oba was a pointer to the fact that the new Olowo was widely accepted by his people.

The epoch-making event held at the Palace of Olowo of Owo Kingdom also coincided with 1, 000 anniversary of the existence of the ancient town.

Traditional rulers from far and near including the Ooni of Ife,  Oba Ogunwusi Enitan; the Deji of Akure, Oba Aladetoyinbo Aladelusi; the Osemawe of Ondo, Oba Victor Kiladejo, other prominent traditional rulers within and outside the state, captains of industry, members of the Ondo State Executive Council, members of the state Assembly, friends and associates within and outside the state.

Presenting the Instrument of Appointment and Staff of Office to Oba Ogunoye, governor Akeredolu expressed joy over the peaceful and hitch-free selection processes which culminated in the emergence of the new Olowo of Owo Kingdom, describing the development as first of its kind in the history of the Kingdom.

The governor particularly appreciated the Omo-Olowos and the kingmakers as well as Owo sons and daughters for a rancour-free selection process.

He emphasised his administration’s commitment to non-interference in any transparent process of selection of traditional rulers in any part of the state, adding that people’s tradition would not be violated for political expediency.

“The presentation of the Instrument of Appointment and Staff of Office to my King, Oba Ajibade Gbadegesin Ogunoye III, as the Olowo of Owo Kingdom, enjoys the approval of God, our ancestors, the Omo-Olowo, kingmakers, other aspirants to the throne, citizens of the great kingdom and foreigners, resident in Owo.

“The Government of Ondo State, exercising its supervisory powers, harbours no hesitation in approving the reasoned, transparent and near-unanimous choice of the people.

“This choice, no doubt, has set the stage for a reign which promises to witness unprecedented peace and development in Owo and all the adjoining towns and villages. The healing process has commenced in a town which had experienced serious crises of confidence in the past. I remain eternally grateful to all those who have made this possible,” Akeredolu added.

Speaking after receiving Instrument of Appointment and Staff of Office, Oba Ogunoye, reiterated his commitment to peace, unity, progress and development of the kingdom.

He added, “I shall promote our values, our heritage, as we lay the foundation for modern development in the second millennium of our existence as a kingdom.”