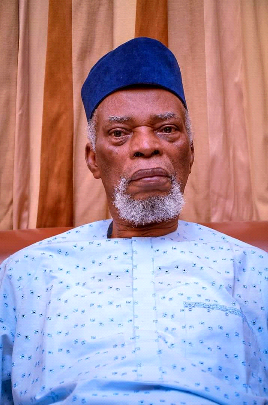 The Ondo state House of Assembly has commiserated with the family of the late Evangelist Bamidele Olumilua who served meritoriously during his lifetime as the former Governor of old Ondo state.
The speaker, Bamidele Oleyelogun, during a condolence visit to his residence at Ikere Ekiti described late Evangelist Bamidele Olumilua as a great mind who injected a lot of thinking into governance during his tenure.
The Deputy Speaker, Iroju Ogundeji and the Deputy Minority Leader, Tomide Akinribido were also among those who paid a condolence visit to the family of the Olumiluas at his residence in Ikere Ekiti to pay their last respect for the former Governor of Old Ondo state.
The speaker described Olumilua as a faithful man who committed his lifetime to serving his people and the country.
Oleyelogun who noted that Evangelist Olumilua died at a time when his wisdom, experience and expertise was needed, said he would be greatly missed by all and sundry.
Responding, the wives to the late Olumilua, Bolatito Olumilua and Oluwayimika Olumilua thanked the lawmakers for the visit describing the death of their husband as a departure of the saint who touched lives during his stay on earth.
They said his death calls for celebration because he died a fulfilled man.
Prayers were later rendered for the family and the overall development of Ondo, Ekiti states and the country in general.
Until his death, Evangelist Bamidele Olumilua was the Governor of Old Ondo state from January 1992 to November 1993.