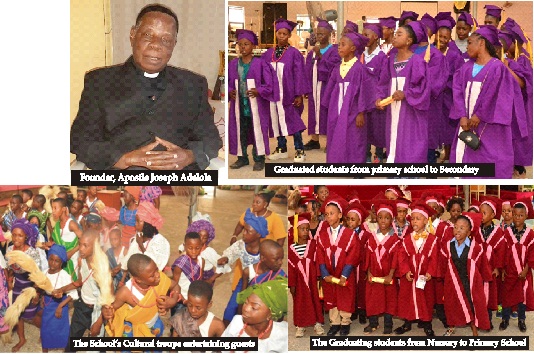 Parents have been charged to be vigilant and secure their wards irrespective of whatever they are doing for a living, particularly during and after the forthcoming holiday.
This assertion was made by a Head Teacher, Evangelist Oluwaseyi Adelola at the school premises in Akure, the Ondo State capital.
According to her,the school is a co- educational institution which is government approved and a missionary school, established through the inspiration of God to bring young ones up in the way of the Lord.
“The school started in the year 1994, under the able leadership of the founder, Apostle Joseph Adelola, which has grown from strength to strength and even metamorphosed to Messiah High School, Akure. lt runs a boarding system that is among the best around, consisting of boys and girls under the guidance of capable teachers.
“With the current educational reality of today, the school offers Phonics, Diction, French and Yoruba language to enhance the intellectual capacity of the pupils.
“God has been helping the school both academically and spiritually, in fact the success recorded in the just concluded common entrance examination was amazing and one of the best in the history of the school.”
She said the mission of the school is to grow the kids academically, spiritually, socially, physically and morally in order for them to add value to the society.
Adelola opined that with the current third wave of the coronavirus pandemic ,the school has succeeded in sensitizing the kids on how to protect themselves against the deadly virus, noting that the students are fully aware of the preventive measures to put in place both in school and at home.
She said the end of the session’s ceremony is an avenue to appreciate God’s faithfulness upon the kids, the management and staff considering what has taken place in the last one year.
The Head Teacher eulogised the founder of the school, Apostle Joseph Adelola who laid a solid foundation for the school to grow, saying that the Founder’s core mandates is preaching the undiluted salvation message for unsaved souls.
“Baba is a disciplinarian to the core and a loving father, though he can scold when necessary, yet he is a wonderful father I ever know.”
The school through the effort of the founder has produced men and women of proven integrity in the society, like lawyers, nurses, doctors and others in their various fields of endeavors.
She advised parents at all level to hold tight to God particularly with the waves of banditry, kidnapping and security situation ravaging the nation.
The woman of God enjoined them to keep their children very close to themselves, saying kidnappers are like roaring lion seeking whom to devour.
She appealed to parents to balance work with home, noting that parents can work for money, but not at the expense of their children as the primary aim of any parents should be how to see the growth of their kids.