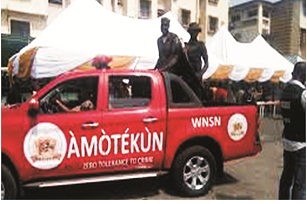 By jubril Bada
|
The All Progressives Congress, APC, in Ondo State has said that the doggedness of the State Governor, Arakunrin Oluwarotimi Akeredolu as the Chairman of the Southwest security outfit coded name Operation Amotekun would boost his chance to be reelected as the governor of the state.

The party posited that the security outfit initiated by the southwest governors and chaired by Governor Akeredolu has enhanced  his popularity and acceptability by the people of the state to reelect him to achieve success towards the security of their lives and property which his administration has given priority.

The State Director, Media and Publicity of the party, Mr. Steve Otaloro who stated this in an interview with The Hope noted that the Operation Amotekun is a child of necessity which has become imperative going by the present security architecture that could not guarantee the safety of people in the country.

Otaloro explained that the security outfit as a matter of fact has united the Yoruba race more than ever before, stressing that the operation would  enhancing his chance of winning the next governorship election in the state.

The Yoruba race, he pointed out, has appreciated present governors in the southwest for their efforts in taking serious security and the wellbeing of entire Yoruba race.

He added that his courage has averred him opportunity to be more accepted by the members of the party and the electorate in the state.

His words: “Operation Amotekun in any way will not negatively affect the second term ambition of Governor Akeredolu, it will only enhance his second term bid because the governor is more popular and acceptable ever since the launch of the security outfit.

“His rating is going higher as he became the governor that everybody wants to associate with because of his doggedness to ensure Operation Amotekun sees the light of the day.

“Lives are no longer safe as kidnappings, killings and other criminalities were so rampant. The southwest governors took up the challenge and initiated the security outfit led by Governor Akeredolu to protect lives of the people in the region.

“People of Ondo State are hopeful and are ready to support his continuity”, he added.