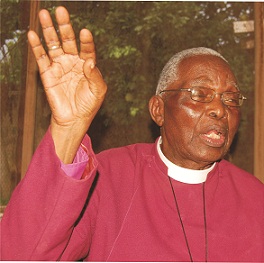 Today, February 3 marks the 44th anniversary of the creation of Ondo State from the old Western Region in 1976. Bishop Bolanle Gbonigi, a retired Bishop of the Anglican Diocese is a year away from being a nonagenarian but remembers the pact shared then between the government and the governed in the newly created Ondo state. In this interview with SUNMOLA OLOWOOKERE, he shares the memories of how Ondo state kicked off in the early years of its creation.

What are your fond memories when Ondo State was created?

What can you remember about the incidences that led to the clamouring for the creation of  the state?

What we don’t realise is that although Nigeria is one country but it is not one nation. Rather, it is made up of different nations. The nations are many. Yoruba, Ibiobio, Edo, Igbo, Hausa, Fulani, Tiv, Efik are different nations.

People in the Yoruba nation began to agigate that they would like to be broken into states so that government  could reach their people.

Ibadan being the headquarters of the present six states, they felt it was too large and therefore too difficult to manage. Since it was a popular demand, the government listened and divided the area into six states; Lagos, Ogun, Osun, Ondo, Oyo and Ekiti was part of Ondo State then.

Then, what was the level of development  recorded in  western region before the creation of states?

The development in the western region was mainly in the area of education. Late Chief Obafemi Awolowo and Chief Michael Adekunle Ajasin along with their colleagues  worked hard together in those days especially as soon as Nigeria gained independence in 1960 because they realized that education is very important and people that are educated always have the will to cooperate with the people they elect to lead and they know their needs. They always demand to have their rights.

They are difficult to deceive because they have education. They know what they need. They know what is their right and they ask for it. That was why Awolowo and Ajasin who were very close friends and others worked hard in the area of education. And the other parts of Nigeria realized that the area was more educated than others. We have highly educated people because primary education was made compulsory then. Primary education which was the foundation was very successful then. Later, there came the modern school.

When students finished in the primary school, those who were able to get to secondary school were few because those secondary schools were few then. Thousands would take entrance exams but they could only take few of us. It was late Ajasin who brought the idea of modern school, so many of us attended the modern school. The main focus of the modern school was agriculture. That was another area where they also recorded development. It was in  human existence.  Every human being need to have food, balanced diet. Different kinds of foods, vegetable, fruits were planted. So they also laid emphasis on agriculture. It was prominent then.

The third area was finance, they laid emphasis on raising funds locally so that there would be money to provide basic necessities of life for the people. There was also Teacher Training College then. Those that graduated from the school were called Grade II teachers.

When you mentioned that they were able to raise funds locally, do you mean Internally Generated Revenue?

Yes. That is what we call it now. At that time, emphasis was  on that. In the villages, farmsteads, they laid emphasis on raising funds locally so that the government  could  have money to serve the people adequately. The emphasis then was ‘servanthood”. They were servant-leaders and not servant-lords. They did not ride over the people. They were people who were elected and given power which belonged to the people but given to them in trust. They were given to them to govern the state.  That was where the idea of civil servants came from.

What we have today are servant-lords even among the civil servants. They see themselves as lords and masters. They expect the people to come and beg them to provide what the people need for them before they could do it. Those things belong to the people but  not all of the leaders are like that.

So when Ondo State was created and people were moved around, what was the experience like?

Well, because I worked with the church and the church had been all over the country. Though the western region had their own government, the state after creation set up their own different ministries; education, finance, agriculture, health etc.

But the governors met regularly, shared knowlege and experiences with one another and compared notes. Hence we have the same kind of projects being executed in the various states. Their developments were uniform. If you move round the states in the region,  you will notice that the government’s focus and concern were on the people and what they need. People moved around easily and they felt at home wherever they were. In some areas of the state though, government could not function properly because of the areas’ culture and tradition.

Well, the state is doing well in terms of roads, schools, health but I want to place emphasis now on internally generated revenue. They only talk about it. They don’t lay much emphasis on it.

There was a time the people working on Land Use Charge just pasted something on my gate. The day they came back, I told them things would not work that way. The government need that money. They need to create more awareness and make people realize the need to build the internally generated revenue base of the government which will help the government to do more for the people.

They said that they were not expecting revenue from me because I am  an old man. But I told them that I must pay because I derive care from the government so I must pay my dues too. It might be small but little amount from a large number of people will go a long way.

They must do it in a way that everybody must contribute to it. I am willing to pay now but they are discouraging me. Others might be willing to play due to their suspicion that the funds will be embezzled while some will pay below their status. Government is losing in that regards. So I’m concerned about it. Government must encourage the people to contribute to this.

What other advice do you have for the people of the state?

All of us should cooperate with the government to govern us and not rule us. The two words are two different things. We should love the people in government and pray for them to organize us well. They are human beings too. They are not angels. They are not perfect. Let us give them advice. However,  most of them do not want to listen to advice. There are some who pretend to listen and do not do it.

Also there are some who listens and follow advice. However when we feel that they are not listening to us or asking us what we need,  we must continue to ask, complain and cry out until they answer us. We must never under any circumstance be violent. When things are not going the way we want, let us complain and ask until we get what we need and not what we want. We must be careful because majority of us people are selfish we should not be selfish. We should be concerned about our needs and others too. Government too should listen to the people. Don’t be arrogant.  Don’t arrogate to yourself what belong to the people.

Look at the senators, how many of them do you know?

Look at me as a retired Bishop, none of them has ever visited me. I don’t know them. They don’t visit me so how can I advise them?  When I could still walk about, I used to go to the local government council at Iju/Ita Ogbolu and give advice to the people at the helm of affairs. Then I felt that they resented  my efforts so I stopped going there. They did not see me as trying to help them to help the people which include themselves. They believed that they have the means of achieving their goals. Like the senators, they will say they did some gutters, dig well out of the huge constituency allowance given to them. They will call the radios and newspapers to cover them. They cry to high heavens that they have done a lot whereas  they have just spend a little out of their allowance. They put the rest in their pockets.

I want to say that God sees you. He knows you and he will judge you. God has no favourites. Politicians should seek to know the face of God.  In your campaign, know the will of God and have the hunger and thirst to do the will of God at ll times, in all places and all circumstances.