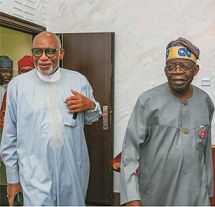 By Adekola Afolabi
|
A rousing home coming has been organised for the Ondo state governor, Arakunrin Oluwarotimi Akeredolu, who is billed to return to the state today.

This was confirmed to The Hope yesterday by the state chairman of the All Progressives Congress, APC,

Mr. Ade Adetimehin and a member of the State Executive Council who is a Special Adviser to the governor on Political Matters and Strategies, Mr Victor Olabimtan.

Governor Akeredolu has been away in Abuja for some time now.

The Hope also learnt that party members, associates and the people in general are already in high spirits, waiting to welcome their governor.

It was disclosed that the arrival of the governor today would be carnival like and a triumphant entry.

Confirming the home coming  of the governor in separate interviews, Adetimehin and Olabimtan said by God’s grace, the governor would be in Akure today (Friday) and would be received by the people of the state.

Adetimehin revealed that party members are fully prepared to welcome and receive the governor back to the state.

He said the governor would be received by jubilant crowd who had longed to see the governor adding that the people were already in high spirits to receive him.

On his part, the Special Adviser to the governor on Political Matters and Strategies, Victor Olabimtan said; “By the grace of God, the governor will be in Akure today. He will fully be here and resume duties on Monday. He has been in Abuja for some time now and he has been discharging his functions of office as we could see and read in the news, on social media, television, radio and newspapers.

“The governor will be received at the Airport by the people of Ondo State, and those who are peddling rumours about will now know that Akeredolu is not sick, Akeredolu has not been poisoned, and Akeredolu is here to continue the good work he is doing.

“All these good work must continue. It cannot be truncated. We are using this medium to tell all our distractors to stop their negative comments. Akeredolu is hale and hearty. He will be around this Friday (today) and everybody will see him.”

Many other banners and placards have also been designed to be displayed to welcome him during what some government officials said would be like a triumphant entry.

Also, the leadership of the All Progressives Congress, APC, in the state under the chairmanship of Ade Adetimehin, friends and political associates and top government officials were fully prepared and in the high spirits to welcome the governor.