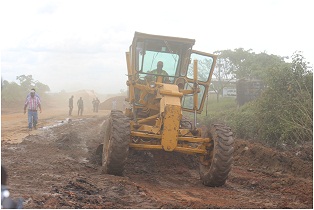 By Chris Chimezie & Agidi Mary
|
Bulldozers and construction equipment roared yesterday along the  deplorable Owo-Ikare road bringing smiles to the faces of motorists plying the road.

The Hope correspondent who visited the federal road observed that the construction was being carried out by the Ondo State government to bring succour to distraught motorists.

Motorists and pedestrians openly showered encomiums on the State Governor, Arakunrin Oluwarotimi Akeredolu (SAN), who gave the directive for the immediate rehabilitation of the deplorable road.

The State Executive Council had at its meeting, approved the immediate rehabilitation of the failed portions of the road to alleviate the sufferings and the untold hardship the bad road had caused commuters and people of the Northern District of the state on a daily basis.

The rehabilitation work  which commenced at the Upenmen axis of the road is easily noticed as motorists who were always at the mercy of potholes had a smooth drive during our visit.

Some motorists and residents, who spoke with The Hope, expressed joy over the development which they observed have brought great relief to them.

According to Mr Ifedayo Opeyemi, a commercial driver, “This road had subjected us to a lot of hardships, ranging from tyre punctures, spending what should have been our gains on replacement of parts of our vehicles damaged by the bad road”, he said.

Also, a Luxury bus driver, Mr Tochukwu Odigbo whose vehicle broke down at Ose-Oba axis of the deplorable road, lamented that he was traveling from Lagos to Kano State and could not continue with the journey.

A resident of Upenme community, Mr Joseph Anuoluwapo while lamenting commuters’ horrible experience on the road which had been repaired several times by previous administrations, attributed the incessant damage to lack of drainage system for free flow of erosion.

He appealed to the State Government to ensure that drainage system is accommodated in the rehabilitation work to enable the road stands the test of time.

On his own, Mr Fidelis Dada, a resident of Ose-Oba community, while describing the road as a nightmare, said it had left many car owners with tales of woes as the bad road had damaged their vehicles and left them with no other option than to trek long distance of kilometers.

The Commissioner for Works, Rt Hon Taofeek Abdusalam, who described the road as very important as it connects to the Northern part of the country, hinted that the State Government would have embarked on its rehabilitation but had to wait for the dry season and to get approval from the Federal Government.

“But for the incessant calls by traditional rulers and other stakeholders, the Governor had to intervene with a view to alleviating the horrible experiences of road users plying the route.

“Akeredolu has been appealing to the Minister of Works, Babatunde Fashola on the urgent need to reconstruct the all-important road, but was assured that the road and that of Ipele would be accommodated in the next budget for action.

The Special Adviser to the Governor on Works and Infrastructure, Engr Raheem Aminu hinted that the cause of damages on the road has fully been analyzed and attributed it to technical problems.

“The road needs hydraulic structures which included drainage without which flooding would cause base failure, that is why the road is always in a bad state, especially during the rainy seasons.

Also addressing Government House Reporters, the Contractor handling the project, Dr Romeo Francis, Managing Director, RCF Nigeria Limited, said he is excavating all the unsuitable materials on ground which would be followed by construction of drainage systems.

He attributed the damages of the road to flooding which assembles on its surface, but stated that drainage would be constructed that would direct erosion into the bush, thereby keeping the road in a perfect shape for many years.