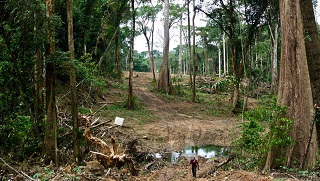 The Ondo State Government has begun a verification exercise on allottees operating in forests in the state.

Commissioner for Agriculture and Forestry, Mr Olayato Aribo disclosed this while speaking with members of the committee set up for the  exercise.

Aribo appreciated the committee for honouring the clarion call especially the Chairman, Mr Anjola Samuel, who retired as Director of Forestry in the ministry.

The Commissioner charged the committee to do a thorough job that would stand the  test  of time stressing that he wanted to put the record straight as regards logging activities in the state.

He said the verification exercise would put a stop to unnecessary bickering between government and allottees as well as rid the forests of illegal allottees.

Aribo added that the exercise would pave way for proper monitoring and evaluation of the forest reserves in the state.

He enjoined the committee to ensure that all allottees were screened, stressing that no genuine allottees should be left out while adding that any allottee who fails to show up for the exercise would be considered as no more interested in his allocation.

His words ” Any  allottee that fails to  appear for verification will be regarded as no longer interested in participating in logging activities in the state, and deemed to have forfeited such allocation “.

He, therefore, promised total support for the committee to achieve the desired goals.

Speaking on behalf of members, the committee chairman, Mr Anjola Samuel thanked the Ministry, for counting them worthy  to carry out the assignment.

He informed the Commissioner that the Committee has invited all allottees and the exercise would be successful, saying competent hands were brought to the committee.

He assured that they  would deliver on terms of reference and reports will be presented in due time.

The Committee was given two weeks to submit its report.