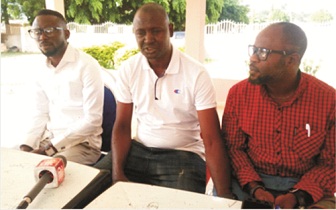 By Femi Atolagbe
|
Sunshine Stars’ Technical Adviser, Kabir Dogo has described Ondo State as a peaceful state and best place for him to work.

Dogo, who stated this during a media parley with the newly inaugurated executive members of  Sports Writer Association of Nigeria (SWAN) Ondo State chapter, said his aim while coming to the state was to get continental ticket for Sunshine Stars.

The former Nasarawa gaffer, however apologised to the football loving people of the state for not being able to put the team where they really belong to.

The Kwara born technical adviser , said he didn’t  belong to the league of coaches that  changes team every year, adding his love for Sunshine stars,was the reason he  dumped Eyinmba and Akwa united.

“If at the end of the season the management reviewed  my activities and extend my contract , I’m ready to stay”.

He described  abridge league as the toughest league in the whole World, saying AITEO Cup has been very favourable to him as a coach. “I have been in two semifinals and a final of the competition in the last five years”

According to him, “all the home matches I had  played were  tough, but I will say Niger Tornadoes and Kwara United matches were the toughest he played at home.

“May be because I’m from Kwara state that made the match against them tougher I cant say.”

The Sunshine TA, “added that officiating has improved in the Nigeria elite league, but they are not giving us any home advantage compared to what we were experiencing while playing away games.

So far so good, I have a good relationship with the Management of the team and all my assistants are fantastic and trusted ally,” he said.

He however appealed to the NFF, LMC to forgive the suspended assistant coach of Sunshine,  Kayoke Julius.

Dogo however called for more synergy between the Sports writers and his crew, saying there was no way you can play football without journalists.

“Praise us when we do well and do your job when we do otherwise”,he said .

While reacting ,the chairman of SWAN in the State, Mr Wahab Bankole assured him of the association’s  maximum  cooperation  and constructive criticism when needed.