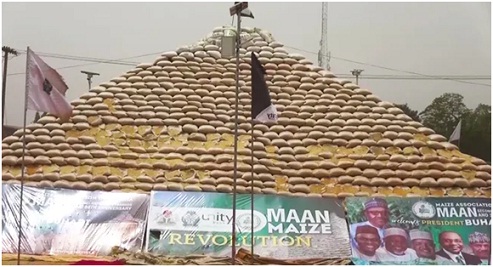 Maize farmers in Ondo state have stated that they are capable of producing maize pyramid.

Ondo state Chairman of Maize Association of Nigeria, Mr Kayode Akinrimade made this known in a chat with The Hope yesterday.

He said if the Anchor Borrowers programme of the Central Bank of Nigeria is still on, farmers in the state would leverage on it for massive production of maize.

Akinrimade disclosed that the state also delivered some trucks of maize for the recent maize pyramids programme held in Kaduna state.

“Everybody contributed to the pyramid . In south-west, we are capable of producing our pyramid, we only need land.

“Over there, in the northern part of the country, they have over 11,000 hectares, but our land is filled up with economic trees, but with the little ones available, we can still produce as much as possible for a pyramid structure,” he said.

Speaking on the soaring prices of agrochemicals, Akinrimade said it is only government that can come in towards bringing the price to manageable level.

Akinrimade also said farmers are mapping their lands for usage in preparation of this year’s farming season.

This, he noted, will follow with requisition and forwarded to Abuja for approval for the farming season.