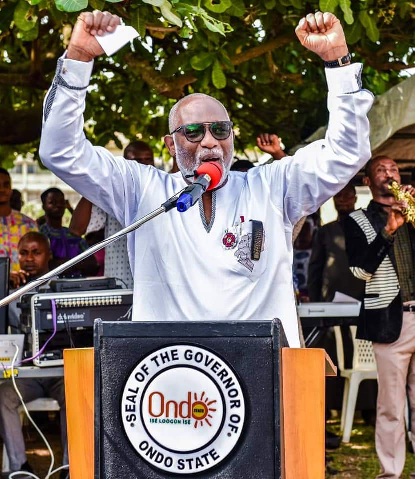 Residents and stakeholders in Akoko area of Ondo State have described the recent nomination of 14 persons and seven others for the positions of Commissioners and Advisers respectively by the State Governor, Oluwarotimi Akeredolu, as a positive way of taking governance to the grassroots and moving the state forward.
The people spoke in their reactions to the development while speaking with The Hope in separate chats.
A woman leader and secretary to the Council of Women Societies in the area, Mrs Opeyemi Ademulegun, lauded the governor for his gender based consideration in his appointment of more women to his cabinet.
Ademulegun specifically mentioned the nomination of Dr Julianah Oshadahun, an advocate of women’s rights and grassroot politician, as a welcome development to the women folk in the state.
The woman leader however said women still deserve this more appointment into key positions in government.
She described Akeredolu’s era in the history of governance in the state as a milestone as he remains the first governor in Ondo State to make a woman as Secretary to the State Government in the person of Mrs. Oladunni Odu.
A retired school principal from Isua Akoko, Mr Olajide Afolabi disclosed that the new cabinet will rejuvenate governance and reposition Ondo State with new ideas that will bring prosperity to the state.
Afolabi urged the governor to also constitute the membership of boards and parastatals that will work harmoniously with the state executive.
The Majeobaje of Ikare Akoko, Chief Saliu Okoja, said the calibre of people selected were carefully picked across the state without leaving any local government out of the nomination.
Chief Saliu urged the State House of Assembly to accelerate the screening exercise in order to allow new members of the state executive settled down for business to allow the appointees to add value of making the state better.