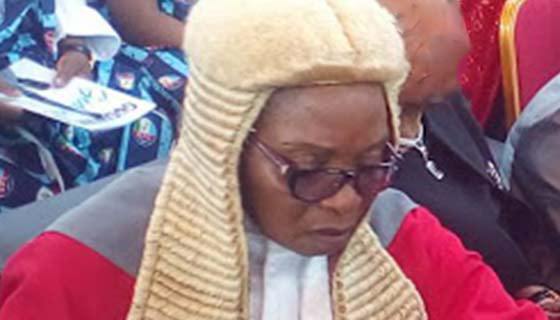 By Sunmola Olowookere
|
The Ondo State Chief Judge, Justice Olutoyin Akeredolu has advocated for a non-custodial sentencing by the courts so as to decongest the prisons.

Akeredolu who expressed concern over the appalling situation of our prisons said a non-custodial sentencing was the way to go.

She said that the situation was giving her some measure of concern and disclosed that some of the prison facilities in the state were overcrowded and congested.

She however regretted that the style of custodial sentencing was the most common, which according to her was  supported by the criminal code.

She said that it is necessary for stakeholders in the judiciary sector to bring together the two laws so that judges can pronounce sentences that will help to decongest the prisons.

“I have performed two prison visits, I have been able to release some inmates during those visits. I know it can be better. Now we are putting a few things in place to ensure that the prisons are decongested.” She said.

She also talked about the halfway house building where freed inmates stayed for rehabilitation before they joined the society and stated that the judiciary is working assiduously to make the facility operational.

Her words “We need to be honest with ourselves, it is not everyone who is remanded at the prisons awaiting trials is good material for the society.

“But because of one hitch or the other, they have not been tried, the law favours them that they should not be there for an unduely prolonged time. But when they return to the society, many of them go back to crime”.

She expressed the belief that any society that is insecure will be one that will be challenged greatly and that any investor coming into a country will first think of security; not only of properties or investments but of lives.