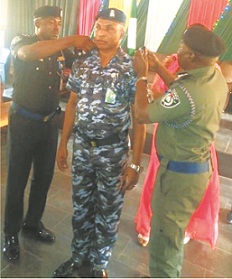 By Michael Ofulue
|
Ondo State Police Commissioner, Mr Undie Adie has said that necessary security strategies have been taken to ensure that lives and property.

He said all the security agencies in the state have met and mapped out adequate measures that would enhance and improve upon all areas that would guarantee the safety of lives of the people.

Adie spoke to reporters shortly after he decorated the newly promoted 19 senior officers of the command.

The police boss, while decorating the newly promoted officers, told them that promotion in the Nigeria Police Force (NPF) was a call for higher responsibility in the service of their fatherland, adding they should be battled ready to embrace the challenge attached to their new rank.

He enjoined them to rededicate themselves to the greater tasks ahead of them and that they should see themselves as representation of the Commissioner of Police in any place they are posted to work, saying promotion comes from God.

The Police boss, who said he was indeed happy that such good number of senior police officers were elevated, urged them to put more efforts in tackling crime-related issues happening in the state.

He, however, said the command would improve on security against what it had last year, just as he called on relevant agencies and the general public to support the police in their quests to rid off the society with all manners of crime and criminality.

Speaking on behalf of the newly promoted officers, ACP Ojewale, who was until his promotion, a Divisional Police Officer in-Charge of Osi police Station in Akure, commended the chairman of the Police Service Commission (PSC), Inspector-General of police, Mr Muhammed Adamu and the state Police Commissioner, Mr. Undie Adie, for counting them worthy of the elevation.

Also speaking with journalists, the Police Public Relations Officer, Mr. Femi Joseph described promotion as a motivator, an energizer that would propels any policeman to do more in any assigned area of responsibility.

Joseph promised to be more dedicated to his duty, just as he commended  the PSC authority, IGP Adamu and his boss, CP Adie, whose recommendation helped them to be elevated to their next ranks.

Other promoted officers who spoke separately with The Hope Metro promised to be more committed in the discharge of their lawful and legitimate duties in any area they are assigned to work.