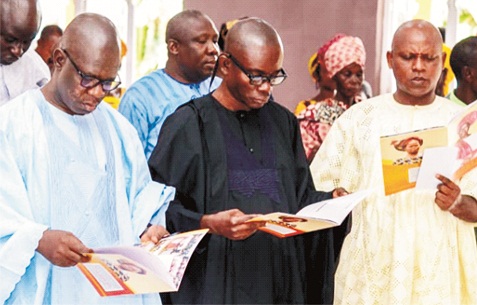 By Evelyn Omotoye
|
Eminent personalities across Ondo State and beyond joined the state deputy governor, Hon Agboola Ajayi in his hometown, Kiribo to bury his stepmother, Mrs. Bosede Ajayi at the weekend.

The funeral service held at the Oke-Iye Christ Apostolic Church auditorium was anchored by the Gospel Faith Mission, Kiribo.

Speaking on the life and times of the deceased, the deputy governor said his late stepmother was very loving, respectful and hospitable, adding that she did not discriminate against other children in their household

Ajayi while lamenting the demise of the woman,  said; “I’m a chief mourner of the deceased because I’m like a father to the family.  We have tried all we could to save her life from her illness but God knows the best.

“For me, she lived a fulfilled life irrespective of her age because life itself is not how long but how well someone has lived and made a meaningful impact on the people around him/her”, praying for the repose of her soul.

In his message titled “The End Matters”, the District Pastor, Olanrewaju Oyegunwa stated that death is a means to an end, emphasising that where one will spend his eternity matters most.

He therefore urged the congregation to shun corruption and strife hard to sustain their decision to serve God till the end irrespective of the challenge that comes their way, saying “where you live eternity is solely your choice”.

In his tributes, the first son of the deceased,  Olagundoye Ajayi described his mother as godly, peace loving and caring,  who according to him “was known for her “famed patience and enduring spirit”.

Speaking with the newsmen at the reception, the ODHA Deputy Speaker, Rt. Hon. Ogundeji Iroju said the place of a mother in the life of a child cannot be over emphasized, advising mothers to give their children best training and leave good legacy behind.

Some of the dignitaries in attendance at the event also include the SSA to the State Governor on Legislative Matters and former ODHA Speaker, Rt. Hon.  Oluwasegunota Bolarinwa among other top government officials, former Caretaker Chairman Ilaje local government area,  Ayowolemi Aworetan and his counterparts in almost all the remaining local government areas of the state.