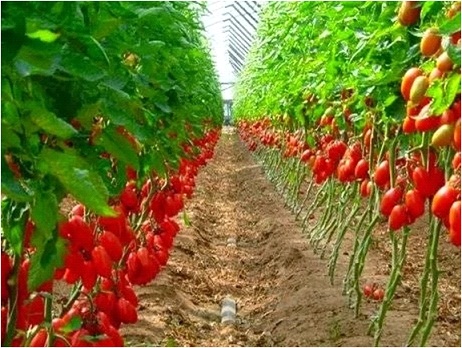 Agriculture is a veritable tool to overcome hunger and poverty in any nation. A nation that neglects agriculture will suffer pangs of hunger and starvation. On the other hand, the citizens when hungry will descend on that nation in annoyance.

Nigeria as a country is the 14th largest producer of tomatoes in the world. On the continent, the country is ranked second (after Egypt) with about 1.8 million metric tonnes (mt), which she produces annually.With over 48 million tomato farmers across the country, Nigeria accounts for 65 per cent of tomatoes produced in West Africa.

For many years, the North was the major food basket of Nigeria. A significant proportion of tomatoes in the South comes from the North. This is because the North occupies 70% of Nigeria’s land mass, giving it comparative advantage vis-à-vis the South in terms of agriculture, raw materials and livestock. A large chunk of the North is arable and supportive of year-round food production.  Thanks largely to the North, there is no tropical agricultural crop known to man that cannot be grown in Nigeria. With a transition from subsistence to mechanized agriculture, Northern Nigeria alone can produce enough food to feed the whole of Africa.

But in recent times, stories are changing as the South have actively been involved in agriculture. This can be seen in the way able bodied men and women are trooping into agriculture, especially tomato farming, in this part of the country. Even gainfully employed individuals are not left out, thanks to the government policy that allows civil servants to add agriculture as an alternative source of income.

Tomato is a glossy red or yellow sharp-tasting fruit which is eaten cooked or raw. It is eaten as vegetable, in salads or as a savoury food. It’s a special ingredient in preparing a delicious meal, especially jollof rice in Nigeria. Some Nigerians who hate too much pepper in soup also use it to reduce spicy hot taste of soup.

Mr Olayinka Ige, who is a tomato farmer in Akure, having experienced hunger and unsatisfied with the present situation in Nigeria has decided to preach the gospel of agriculture, especially tomato farming to the people who are willing to embrace it. According to him, “I don’t have a degree in agriculture or any degree relating to farming, all I have is passion and the mindset that poverty wasn’t for me, although the journey was not rosy because of the bad economy”

Olayinka who started as a pig farmer had challenges on how to dispose the waste from the pig farm, in his words he said “I piled up a lot of droppings from the pigs but nowhere to dispose them, then I later got to know that it can be used for manure, more over livestock farming is consuming money, I had to diversify into crop farming.”

He started tomato farming mainly after the COVID-19 outbreak, he had previously learnt so much about tomato farming, but there was no time to start, the lockdown gave him the golden opportunity to start up his tomato farm. He said “when everybody was shouting of hunger because of the lockdown, I thought about what I could do with my time, then I decided to go fully into tomato farming, I had a lot of challenges with money that I sold more than 20pigs to start up my tomato farm.”

He made mention of the challenges he faced when he started, he said “there were empty lands around which nobody was using, these lands attracted snakes to my house, that I started killing snakes almost everyday until I decided to start my tomato farm on it, people made jest of me when I started but ran back after five months when they saw the progress and how I have made so much money.”

He also explained the soil requirement for tomato farming, he said “Tomatoes do not have strict soil requirements. They grow well in a wide variety of soils, provided they drain well. However, the plant thrives best in medium sandy soils with proper aeration and drainage. The plant is sensitive to both drought and water-soaked conditions.

He further discussed how tomatoes can’t grow well under trees. He said, “tomatoes can’t be planted under trees, if you have 500trees of banana, cut down 300trees for tomatoes, it’s a journey you will never regret embarking on.”

He also discussed on the importance of greenhouse. He said “growing tomatoes outdoors, if done rationally and on a scalable basis, can be a good source of income, but tomatoes grown in heated greenhouses provide several benefits to a general farming operation, it provides high production rate. He said “the packaged tomatoes you see at the grocery store was not imported from anywhere, we supply them here in Nigeria.”

Another tomato farmer, Babafemi Akintunde said there are many of tomato farmers in Ondo state now, making the tomato market jam-packed.

According to him; “For many years, I was strictly into maize farming, not until a friend showed me the light, before I started tomato farming, I believe i was in total darkness, personally I’ve introduced more than 100 individuals to tomato farming, and it’s a business that is flourishing in Ondo State, even if the north does not bring in tomato here for years, we are secured, because sometimes we have to export our own products to other states to sell, because sellers are too much here in Ondo State, we export to Lagos, Edo, Osun, Ekiti and other states. So far, the business has been very profitable, a 25kg fresh tomatoes is up to N20,000 to N25,000, depending on the sizes,” he added.

In the same vein, Adekunle Omoyeni who is also a tomato farmer said the business looks rosy and good but nobody is talking about the serious challenges tomatoes farmers face.

According to him; “We farmers face a lot especially tomato weed, tomato frost and transportation related problems. Even lack of storage facilities is a major problem and lack of market centers because tomato farmers are too many now, and we really don’t have different markets around. It’s just a major headquarters market where everybody bring their product, that’s the Shasha market.

Where transportation problem comes in is when you want to transport your product to another state, drivers start charging extravagant fares, and tomatoes are very perishable, making one accept an unfair bill, now farmers are left with little or nothing, before anyone thinks of joining the wide market of tomatoes, these issues should be put into consideration,” he said.