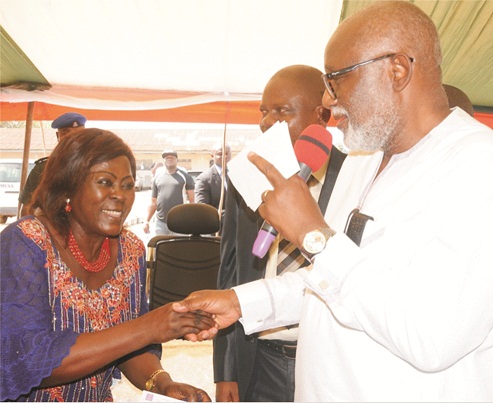 By: Bisi Olominu
|
It was a boisterous atmosphere in Akure yesterday as owners of properties demolished by the Ondo State government for road construction were paid their compensation.

Excitement pervaded the air and sheer joy was palpable on the faces of owners of properties that gave wat for dualization of roads in Akure, Ikare, Owo and Odigbo Local government areas of the state.

For many, it was pure fun in the town, as the owners of houses to be demolished exchanged banters and eulogised the state government for keeping its promise .

Speaking at the presentation of cheques for the payment of compensation to owners of properties affected by the projects, Ondo State Governor, Arakunrin Oluwarotimi Akeredolu assured the people of the state that all his administration campaign promises shall be fulfilled.

Akeredolu said further that it was disheartened for someone’s house to be demolished for road construction without compensation, noting that the present administration has humane feeling and peoples friendly, reason the compensation was delayed.

” It is disheartened for someone’s house to be demolished, but since we want development some houses must give way.

“We are paying compensation to owners of properties affected. Either they have Certificate of Occupancy or not, have any document or not, but since they are the rightful owners, the government is paying them cheques today.

” I have passion for the development of Ondo State, reason we are concentration on the infrastructural development of the state. Despite no advance payment made to our contractors before starting the projects, understanding has been made that money shall be made available as the projects advance.

“It is God that has been helping us in Ondo State, for it is beyond my imagination”.

Arakunrin Akeredolu assured the people of Ondo State that no local government council shall be left behind in development.

” We shall deliver our electioneering promises to the people of Ondo State. Our 5 cardinal programmes shall be meticulously, judiciously followed, urging the people of the state to key into the agricultural programme of the government to better their lots.”

Governor Akeredolu disclosed that work is ongoing in the afforestation of the state, stressing that the government is set to reinvigorate government forests to meet the yearning and aspiration of the people.

He assured the people of Ondo State that the government would not abandon any project, calling on them to allow peace to reign, for only in the atmosphere of peace would development come to the state.

“Peace is the only way to development, let us give peace a chance in Ondo State.

Earlier in his welcome address, the Commissioner for Works, Mr. Taofik Abdusallam has lauded the state Governor for embarking on developmental projects that would transform the state.

He said that opening up A’,Division to Ijoka road in Akure will solve the incessant gridlock in NEPA area of the state capital, noting that a lot of road constructions are ongoing in the state.

” The essence of paying cheques to owners of properties affected by the road projects is to alleviate their pains.

“We are assuring the people of the state that the investment of government on capital projects will be highly protected.

” We are also resolute in our determination to make sure that contractors handling road projects in the state use standard materials. The ministry is ready to support the state government on its developmental strides in the state.”

Abdusallam urged the recipients of the cheques to use them judiciously.

Speaking at the occasion, the Chairman Ondo State Council of Obas and Olukare of Ikare, Oba Akadiri Momoh lauded the state governor for the laudable and breath taking projects embarked upon since assumption of office.

He also praised the government on attention being giving to Owo/Ikare road, thanking the state government for its prompt action on the road despite it being federal government road.

The Oniyere of Iyere in Owo Local government area, Oba Omotunde described what is going on in his domain as unprecedented.

The Olore of Ore, Oba Johnson Olatunde commended the state government for embarking on the flying over in the areas, disposing that many lives have been lost while crossing the expressway in the area.

He also thanked the Governor on the various projects ongoing in the area, promising that the people of Ore in Odigbo local government area will always support the present government.

In their responses, formed Commissioner for Women Affairs, Mrs Margaret Akinsuroju, Mr. Alade Jacob from Akure and Elder Akin Abiodun from Owo commended the state Governor, Arakunrin Oluwarotimi Akeredolu for the giant strides recorded so far in the state.

They stated that his infrastructural development of the state has started yielding results. They all commended him for fulfilling his promises to the people of the state.