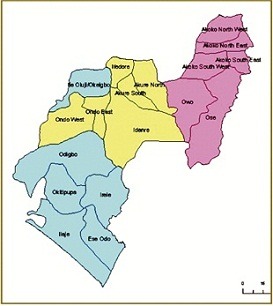 By Kehinde Oluwatayo
|
Over one hundred and ten Local Council Development Areas (LCDAs) have been demanded for by various communities across the 18 Local Government areas in Ondo State.

This figure, according to The Hope findings was demanded for in the 94 memoranda so far submitted to the committee saddled with the responsibility of working on the LCDAs creation in the state.

The committee commenced public hearing on Monday and had so far visited eight local governments where 41 LCDAs were demanded for creation.

In Ile-Oluji Okeigbo local government, two LCDAs were demanded to be created from it and they include Okeigbo LCDA and Ileoluji West.

Other local governments visited are Akure North, Akure South, Ifedore and Idanre where 21 LCDAs were requested for creation.

In Ifedore, five LCDAs were proposed to be created from the local government which include Ifedore Central, Ijare, Ifedore, Ifedore West and one other.

Also in Idanre, one memorandum was jointly submitted for four LCDAs which include Idanre North, Idanre Central, Idanre East and Idanre West.

Speaking during the opening ceremony of the public hearing in Akure on Monday, Chairman of the Committee on Creation of LCDAs in the state, Prince Adelanke Odogiyan reiterated that the essence of the creation was to bring governance closer to the people.

He added that the people will be able to play supervisory role over it since  it will be manned by the people, adding that it will ensure that the dividends of democracy are made more realistic in the lives of the people.

While calling on sponsors of memoranda to adopt them since the committee had studied them, Odogiyan said if there were corrections and amendments, they would be effected.

He appreciated the people of the state for their confidence in the present administration demonstrated by submitting 94 memoranda when the committee was inaugurated.

While saying that the project will bring development to the people, the Ajobu of Araromi obu, His Royal Majesty, Oba Aderemi Adelola said the people have been agitating for it long ago describing it as a welcome development.

Also, the Olore of Ore, Oba Johnson Olatomide expressed confidence in the integrity of the State Governor, Arakunrin Oluwarotimi Akeredolu saying he would not say what he did not plan to do.

The programme is expected to last for one week.