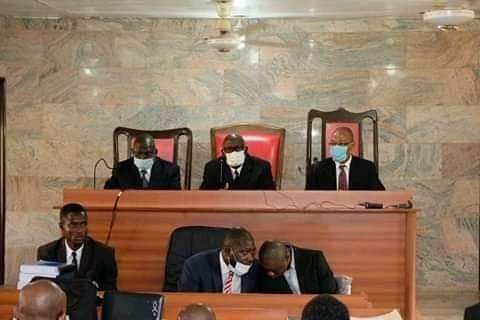 The Ondo state governorship Election Petition Tribunal sitting in Akure, yesterday dismissed two out of the three petitions filed by three political parties and their candidates contesting the outcome of the October 10 governorship election in the state.
The political parties whose petitions were dismissed were Action People’s Party, (APP) and action alliance, (AA).
They were dismissed for not filing pre trial forms.
The petitions were also filed out of time and petitioners were said to have abandoned their petitions.
The Action People’s Party (APP) and Action Alliance (AA), had filed two petitions before the court against Governor Rotimi Akeredolu, the winner of the election, his party, APC and INEC.
Counsel to the respondents had earlier urged the court to dismiss the petition on the ground that it was not ripe for hearing.
Counsel to the petitioner, F. O Olawole also agreed with the respondents’ counsel that the application was filed out of time.
The panel then threw out the first petition for lack of merit while the lead counsel for the APP made application for the withdrawal of the second petition and it was granted by the panel.
The court also awarded cost of N100, 000 each against the petitioners and adjourned the case till January 11, 2021 for pretrial.
Following this development, the tribunal now has only the PDP’s petition filed by its candidate Eyitayo Jegede, SAN, against the winner of the October 10 governorship election, Governor Oluwarotimi Akeredolu.
Earlier, the Chairman of the Panel, Justice Umar Abubakar, while delivering inaugural address at the sitting, Abubakar called on parties and their counsel to avoid having direct communication with any of the tribunal members and ensure that all correspondence as made through the registry of the tribunal.
He impressed it upon them that the nature of the sitting is time bound and urged them to dispense with all processes in due time.
The judge assured the parties that the tribunal will maintain the existing cordial relationship between them while also soliciting for their support in carrying out their duties.
He equally solicited that the counsel should avail the tribunal of all that they would need to carry out their duties properly.
In a response, Lateef Fagbemi SAN, lead counsel for the second respondent, Orimisan Aiyedatiwa, the Ondo State Deputy Governor-elect appreciated the panel and assured it of their utmost cooperation.
He requested the panel to direct parties leaderships to nominate 10 people in order to avoid congestion of the courtroom.
While speaking with newsmen, the Deputy Governor-elect, Aiyedatiwa said that he has confidence in the panel as it had promised that justice would be served in the case.
Dr Onyechi Ikpeazu, Lead counsel to the petitioner, Eyitayo Jegede SAN told the sitting that parties had agreed that all applications be taken along with the final written addresses.
Further deliberations were adjourned till December 17, 2020.