Ondo: In defence of first family 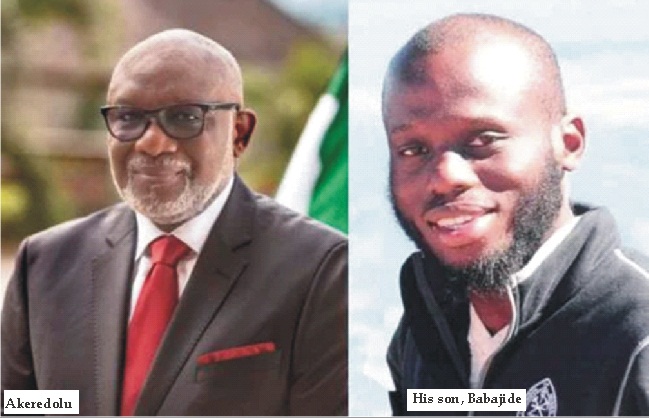 The Ondo State social media ecosystem was recently awashed with some watery allegations of corruption against the First Family of the state.

The allegations, mainly from the People’s Democratic Party and their haggard online sympathizers, were as spurious as they were laughable, to say the least. Simply put, the allegations were products of infertile imagination!

Till this moment, no rational mind has been able to deconstruct exactly why the PDP’s spokesperson in the state, Kennedy Peretei decided to raise hell where none existed. Well, there’s a school of thought which says the PDP is a dying horse in the state and hence needs anything to cling onto to stay afloat ahead of the 2023 general elections. But must one lie to stay relevant?

Perhaps more of such spurious and legless allegations will still emanate from the arid and odoriferous stable of the PDP in the coming months. It’s a jaded strategy as the first kite it tried to fly could not even lift itself from the ground before it was shredded into pieces and dumped into the dustbin of history.

Although the allegations hold no water as they are merely hot air, it is pertinent to expose the futility of the PDP and its co-travellers in this stream of infamy they are swimming in against the rising tide of Governor Rotimi Akeredolu, SAN and his beautiful family.

As expected, the state government through the Information Commissioner, Donald Ojogo, has reacted to the allegation against the Governor that the executive sponsorship of the Ondo State Anti-corruption Bill recently passed by the state House of Assembly is meant to shield the Governor and his family from prosecution against possible crimes of corruption. Pray  will Akeredolu and his family be in power forever? Is the law not in operation in the PDP controlled Oyo State? Why the hues and cries?

For the delectable First Lady, Mrs Betty Anyanwu-Akeredolu, who was accused of using her girl-child initiative, BEMORE, as a conduit pipe to steal from the state’s coffers, BEMORE as a well-structured organisation, designed to empower the girl-child through several worthy initiatives such as training in ICT, renewable energy, and more, has reacted and rightly so, to counter the allegations, shredding them bare in the process.

The responses in defence of BEMORE by officials of the non-governmental organization and even some of its alumni and by extension, Mrs Akeredolu, could not have been better phrased as they contained only the truth and nothing but the truth anchored on receipted facts, all laid in the public bare, to expose the willful ignorance and crass stupidity inherent in the phantom allegations the PDP conjured from the pit of hell.

Of course, for the politically discerning, the principal target of the rash of bogus allegations by their supine authors is Babajide Akeredolu, son of the governor, who was recently appointed and sworn into office as the Director-General of Project Performance, Monitoring and Implementation Agency in the state.

There’s no iota of doubt that the appointment, first of its kind, which is deservingly merited by the young man going by his contributions to the APC in the state, the re-election of the Governor, pedigree, competence, topnotch skills in project design and implementation, strategic communication, election management, among others, has rattled and continues to rankle the PDP and its column of palace jesters who are strangers to competence.

Worried by the rising profile of the young star, the PDP probably thought the best way to cut him down is to burden him with jejune allegations thinking that the people of Ondo State would buy into it and hence ostracize him from their fold. The trick has boomeranged because no matter the garb or ornament a lie is dressed with, the truth will always undress and uncover it.

Babajide or Babse as he is popularly called is capable of defending himself and has since done so with unimpeachable facts that can be verified by anyone who cares to know the truth. He could have decided to ignore the naysayers because, in reality, there was nothing to expend energy on defending oneself against baseless allegations but because of his impassioned predilection for truth in place of falsehood, he did reply the authors of the satanic verses alleging corruption against him and hewers of innuendos purporting to contain truth.

Escalating the reply of Babajide further to the allegations, it is apposite to this intervention to ask the PDP why it could not even conduct a simple research before concocting the allegations which have further exposed the nauseating emptiness the party embodies. Is this the party that is angling to take over power from the APC in the state? God forbid! Ondo State will never return to Egypt again.

To start with, a quarter of the companies supposedly owned by Babajide do not even have a bank account which implies the companies have not been involved in any financial transaction whatsoever. If that is so, which is the truth, how will such companies be used to siphon money allegedly belonging to Ondo State without a trace? Well, only the PDP can provide an answer to that.

For those who don’t know, Babajide is a trained engineer with a strong passion for graphics, photography, strategic communication, among others. It’s his passion for strategic communications that led to the incorporation of Erudit in 2017. Today, Erudit has successfully been involved in elections in Ondo, Ekiti and Kano, which all ended in a resounding victory for the communications firm’s clients. Or when has it become a crime to leverage one’s passion to make legitimate money? It won’t be out of place to even recommend Ondo PDP who has been suffering serial losses to contract Erudit in the prosecution of 2023 elections!

Babajide, like his mum, the First Lady, believes so much in youth empowerment. To that extent, he is ever ready to support any genuine innovation or creation that will create economic advantage for any enterprising youth.This is exactly why he is involved in Limerit Limited, a company the PDP claimed belongs to him and it’s being used to ferry money out of Ondo State.

Developed by Ilesanmi Ade Ademola, an ally of Babajide, in 2020, Limerit is to commercialize Brick Technology. You won’t believe bricks which are products of the company were endorsed by the Vice President, Yemi Osinbajo,  because they are cheaper than blocks, bullet-proof and suitable for our tropical environment because they are largely heat-resistant. As of this moment, Limerit has no bank account and has never been involved in any contract or transaction of any kind with the Ondo State government. Again, the PDP goofed.

It’s open knowledge that Babajide is the founder and leader of the Pentagon Movement Group in Ondo State. The Pentagon Motusi –created in 2021 is an investment arm of PMG, designed solely for investing  in promising ideas of members of PMG. In other words, an angel investment vehicle. And so far, it has only invested in Zee Hub, an innovation hub established by a member of PMG. Zee Hub is a great hub in Ondo Town to learn about strategies to win elections.

As for Claribet Consulting Limited created in 2020, where he is a minority shareholder, it was created  based on demand outside of Ondo State to replicate the successes of the BEMORE Foundation renewable energy initiatives. As of today, it has no bank account and has never been involved in any paid projects or contracts with the ODSG. The PDP was certainly hallucinating when it alleged that the firm is a conduit pipe for looting the state’s coffers.

And last but not least, Emerging Communities Africa. It’s created to manage the Akure Tech Hub at FUTA. It is currently executing a partnership with the European Union. Ondo State is now the primary link between the EU and all Hubs across Nigeria, all thanks to ECA. It has never been involved in any paid contracts with the ODSG in any form.

In any case, in the interest of full disclosure and compliance with the code of conduct rules for those holding public offices, Babajide is ready to step down either as a promoter or minority shareholder in the companies/organizations associated with him. But as for the PDP in Ondo State, here is a parting shot for you: stop chasing shadows; that is not how to be involved in constructive opposition.

Olabimtan is the Director-General of Akeredolu Campaign Organisation (2016 and 2020).