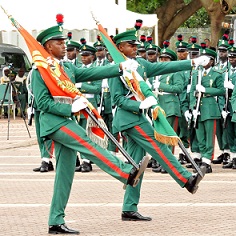 By Josephine Oguntoyinbo
|
Ondo State Government has inaugurated the planning committee on the year 2020 Armed Forces Remembrance Day celebration in the state.

Inaugurating the committee on behalf of the State government, the state Commissioner for Women Affairs and Social development, Mrs Titi Adeyemi informed that  the remembrance day celebration is an event that is being observed in all Commonwealth countries of the world to celebrate fallen heroes.

She said Nigeria,, having ended its civil war on 15th January 1970 decided to set aside 15th January of every year as the Armed forces remembrance day celebration in the country, purposely to give due reverence and honour to the gallant heroes/heroines who fought in various wars and peace keeping operations all over the world to maintain global peace.

To this end, the commissioner noted that the state government decided to put in place the committee, which comprises of personnel from relevant government establishments in order to have a well packaged programme and ensure a befitting and successful celebration in the state.

Mrs Adeyemi added that the emblem appeal  was  launched by President  Muhammadu Buhari on Wednesday 16th October, 2019 at the federal level, therefore, state and local governments are expected to follow suit to launch the emblem in support of the council of the Nigerian legion in the state.

While charging committee members to bring in innovative ideas that will ensure a successful outing, she expressed confidence in the calibre of officials inaugurated at ensuring adequate planning and implementation of programmes.

The Commissioner appreciated the state government for the timely release of funds for all programmes of the ministry, especially on the empowerment of 30 widows of the slain soldiers during the last year’s celebration,

She stressed the need to carry those at the grassroots level along to achieve success. She therefore urged all local government caretaker Chairmen to immediately inaugurate their planning committee in their respective local council areas without delay.

The Chairman Nigerian Legion, Ondo State, Col. Olu Apata (Rtd) and the Chief of Staff, 32 Artillery Brigade Owena barracks, Akure , Brig. Gen Danumar Bello, who are members of the newly inaugurated committee assured that they will not betray the confidence reposed in them as the committee will put in its best to ensure hitch free  and successful celebration.

Col Apata commended the state government for taking their welfare and that of the widows of fallen heroes as priority.