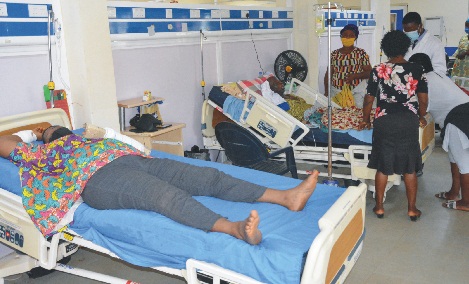 The ongoing strike action embarked on by the Joint Health Sector Unions (JOHESU) has no effect on health services in Ondo State.
Investigations by The Hope revealed that service delivery in all the health facilities across the state was going undisturbed.
Reports from all the government owned health institutions across the state showed that health workers of all categories were at their duty posts attending to patients.
At the University of Medical Sciences Teaching Hospital, Akure complex, normal day to day activities were ongoing in all the departments of the hospital.
A Health Assistant who spoke on condition of anonymity said that there is no strike action of any form by any group in the hospital.
According to her, all health workers wre on ground to give their best to achieve qualitative health care delivery in the facility.
Another JOHESU member at the state Mother and Child Hospital who does not want her name in print told The Hope that the staff were at their duty posts, but warned that they were likely to join the action if called upon by the state union.
Speaking with The Hope on condition of anonymity at the Federal Medical Centre (FMC) annex, Akure, a female nurse disclosed that nurses in the facility were not on strike, noting that the health workers who are mostly administrative staff who wanted to equate themselves, with the nurses in terms of the hazard allowance.
She explained that nurses and doctors are mostly at the fore front in the fight against COVID-19 saying “we have been paid 50 percent COVID-19 allowance while they(other health workers) were paid 10 percent. They are fighting for 40 percent which I believe is not suppose to be so.”
A Doctor at the Federal Medical Centre, Owo while speaking with The Hope on phone said work was ongoing either with or without JOHESU members in the facility as the doctors wre coping.
Speaking further, he said; “The work is being affected but we are trying to cope. Yesterday morning, there was no light, but it was later restored. As at today, we have light and running water.”
Ondo State chairman, National Association of Nigerian Nurses and Midwives, Mr. Kehinde Olomiye said that efforts were being put in place as regards the ongoing strike and assured that “it is not affecting states for now.
Report from Akoko said health workers in Ondo State owned hospitals across the Ondo North District were at their various duty posts.
When The Hope visited state government hospitals in Ikare, Iwaro and Owo, health workers in the hospitals were seen carrying out their official duties.
At the Ondo State Specialist Hospital, Ikare Akoko, doctors, nurses and other allied health workers were seen attending to patients.
The Medical Director of the institution, Dr Ayodele Ogunlade disclosed that the strike is a federal government institutions affair.
At the General Hospital Owo, it was the same story as medical personnel were seen attending to patients and at their duty posts.
The Chief Medical Director of the Hospital, Dr Igbekoyi said all his workers were on duty.
However it was a different stroke at the Federal Medical Centre, Owo where The Hope learnt the strike was on.
According to a competent source in the hospital, members of JOHESU were taking part in the strike as called for by the national leadership of the union.