Ondo  ‘ll be self sufficient in fingerlings 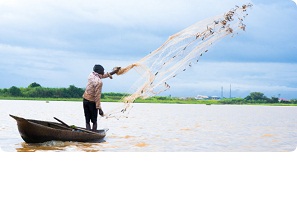 Ondo  ‘ll be self sufficient in fingerlings

By Kehinde Oluwatayo
|
Ondo State Government  efforts at ensuring food sufficiency for domestic and economic purposes through agribusinesses are yielding fruits gradually going by the participation of private investors.

This was contained  in a press releaseby the Head of Media Unit of the ministry, Mr Bolu Ajijo.

The Commissioner for Agriculture Asiwaju Adegboyega Adefarati gave the sheering news after the assessment of the facilities at the Ondo State Sunshine Fisheries Limited behind Adegbemile Cultural Centre Alagbaka, Akure.

According to Adefarati, the company which was abandoned by the previous administrations for over 10 years in spite of its immense potentials to turn round the fish acculturation sector of the state for the better was firmed out to the new manager earlier in the year.

Adefarati said he was happy to report that Governor Oluwarotimi Akeredolu avowed commitment to revolutionize the agriculture sector especially production of fingerlings in order to stop capital flight to neighboring states of Edo, Delta,  Osun and Oyo states is a welcome development.

While appreciating the governor for his business foresight, turning down initial investor that requested an injection of N13 million into  Sunshine Fisheries project said  the current facility manager did not asked for a dime from the government but has been investing its private fund to resuscitate the once moribund facility, quipped Adefarati.

Speaking to the press after a guided tour of the company facilities,  the  Chief Executive Officer of Samalad Group, the firm managing, Sunshine Fisheries Limited Akure, Rear Admiral Sanni Alade, Rtd said the challenges are enormous but that the company is doing its best to turn them into milestones.

According to him, the problems include acidic water supply not good for rearing of fingerlings and fish, obsolete equipment, dilapidated structures, lack of fence to keep away marauders and illegal usage of the company ponds by out growers.

Admiral Alade promised that by the end of first quarter of 2020 the company that was designed to produce between 3 to 5 million fingerlings annually would have started yielding dividends to all the stakeholders particularly payment of dues to government coffers in line with the MOU it entered into..

Speaking on the technical capacity of the facility, the consultant to the project Mr Ojesanmi Safara said the facility has the ability to be a leading producer of fingerlings of cat and tilapia fish.

The facility which was firmed out to Samalad Group has the following departments, fingerlings production section, modern laboratory, feed mills, fish drying equipment to mentioned just a few.