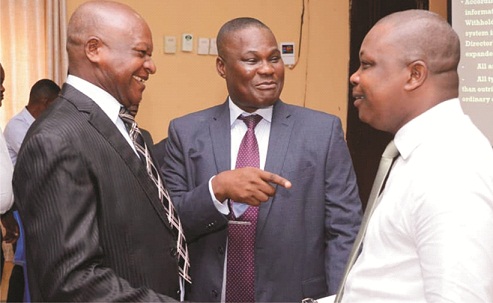 Over N3billion has been lost by the Ondo State Government from its Internally Generated Revenue (IGR), due to  poor handling of transactions involving taxes remittances by the workers.

One of the Chief Consultants with J.A OARS Consulting firm, Dr Soji Adedokun disclosed this to The Hope in an interview yesterday.

Adedokun, who spoke in Akure at the end of a two-day training programme titled “Result Based Management in Transaction Taxes”, which was organised for all Accountants, Treasury Officers, Executive Officers (Account) and Internal Auditors of Ministries, Departments and Agencies (MDAs) in the state civil service observed that close to N3billion had been lost by the state to the Federal government in the past few years due to wrong remittances by the state staffers.

He maintained that the state government recently uncovered a serious gap in the remittance of taxes generated in the state and what reflected in its coffers, which precipitated the engagement of the consulting firm to unravel the problem.

The Chief Consultant said going by the shrink in resources coming to state governments in the country, they are now focusing on taxes to generate more resources.

He said: “That is why the state organised this training to correct the error and from the feedback from participants, they have been sensitized and they have been impacted positively, he added.

According to him, to minimize the revenue loss, adequate and up-to-date knowledge of the principles and practices of the taxes were non-negotiable for modern day business and entities.

“To halt government’s continuing loss of revenue through wrong remittances of withholding and stamp duty returns, understand the key principles of result- based management of such taxes”

” They must also understand the challenges and opportunities that are inherent in the administration of such transaction taxes through systematic planning and adaptive project implementation”, he said.

Declaring the workshop opened, the state Commissioner for Finance, Mr Wale Akinterinwa, represented by his Permanet Secretary, Mr Emmanuel Adelayi said the workshop was tailored towards building officers’ capacity for result based management in taxes.

He made references to Value Added Tax(VAT), Withholding Tax (WHT) and stamp duty in line with Nigeria tax law system.

Akinterinwa said that the training will assist government to overcome the obstacles of persistent loss of revenue to inappropriate tax authority and keeping all relevant government officials abreast of emerging trends in efficient and effective tax collection management.

Akinterinwa, who applauded the Governor for his commitment towards the development of human capacity in the state, implored the officers to adapt the concept of tax remittances and deductions reeled out by the consultants.

In his welcome address, the state Accountant General, Mr Herbert Akindolire said the workshop was targeted at establishing a standard for tax computation, deduction, remittance and documentation in line with the Nigeria Tax Law.

Akindolire disclosed that the state Internally Generated Revenue had been a major concern due to lack of awareness and understanding of the legal basis for the applicable rate of VAT and WHT deductions in financial transactions.

The causes of the persistent revenue loss, Akindolire noted informed the state to engage the services of Messer J.A OARS on sensitizing officers saddled with the responsibilities of various tax deductions and remittances across all MDAs and on the need for strict compliance with the rules of the game.

The two-day workshop with the theme: “Building Capacity For Results Based Management in Transaction Taxes Value Added Tax (VAT), Withholding Tax (WHT) and Stamp Duty took participants through the presentation of the practical perspective of  withholding Tax Management and Stamp Duties administration in Nigeria today.