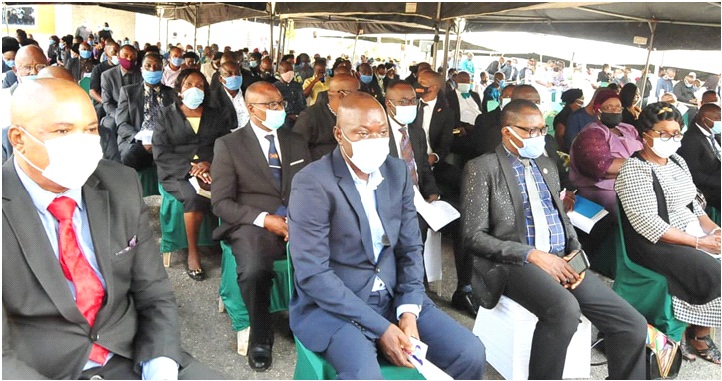 It was the first working day in the new year, and as usual a prayer session is usually organised by the state government with all public servants in the state and the political office holders.
The essence of the prayer session was to appreciate God for his goodness in the lives of the people and the state in general in the past year, and also commit the activities and the affairs of the state in the new year into the able hands of the Lord. The people are always clad in fine attires with a joyful mood in the presence of God who saw them through the previous year.
But for the Year 2021, the mood was different even though the people still came to the presence of God with a grateful heart. The black attire and black arm bands clearly depicted the mood of the state and the people. It was clear that the state was in grief. The turn out of people was large and impressive but they were moody.
The reason was clear; less than 48 hours to the first working day prayer meeting, the state lost the Chief of Protocol (CoP) to the Governor, Tosin Ogunbodede, Esq, in a ghastly car accident along Ilesa-Akure road. This was apart from four other appointees who also departed this sinful world in the course of the year.
At the prayer meeting, two minutes silence was also observed in honour of the departed souls.
The sad news of the untimely death Governor Akeredolu’s CoP came to the state, friends and associates as a rude shock and incredible as well; but it was real and true. Although many sympathizers called this a challenge, the state Governor, Oluwarotimi Akeredolu, called it one death too many.
Notwithstanding the obvious challenge, as customary, the number one citizen in the state summoned courage and led other top government functionaries to the prayer season held at the open courtyard behind the Governor’s Office complex. He wore a mournful look with black arm band, reflecting soberness and mourning.
Speaking at the prayer meeting, Governor Akeredolu, explained that despite the sad occurrence occasioned by the death of the CoP and the lure to suspend the annual first working day prayer meeting, it was necessary the programme was held to show the devil that he has lost the battle.
The Governor noted that the state would surmount the trying period and come out victoriously.
Governor Akeredolu who read the only Bible lesson at the prayer meeting thanked the civil servants for being cooperative since he assumed office but urged them to shun politics in whatever form.
He urged the religious leaders in the state to continue to pray for him and the state at large, saying their prayers are needed now more than ever before.
“Holding this prayer meeting was to tell the devil that he did not win. We will triumph. We are being tested, we will surmount this test. We will overcome. We shall overcome. We have lost five of us . I want us to observe two minutes silence for the repose of their soul”, the Governor emphasised.
He equally congratulated the people of the state and wished everyone a prosperous New Year 2021.
“Being the first day of official business in the year, we are here gathered, as we normally do every year, to appreciate the Almighty God for His blessings upon our lives, individually and corporately, in the outgone year 2020. This assembly will also afford us the opportunity to humbly commit our journey in the New Year unto God’s able hands.
“As I often say, the journey so far has been dotted with God’s blessings and protection and we should, therefore, not fail to acknowledge that fact”, he stressed.