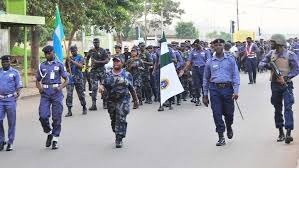 By Tola Gbadamosi
|
The Commanding Officer Forward Operating Base in Igbokoda, Commodore Danjuma Ndanusa, has imposed a curfew in Gbagira, Awoye in Ilaje local government.

This was just as a directive was issued by the base to the community leader to ensure that the four military heavy rifles and seven magazines stolen during a gun battle at Gbagira village was produced.

As investigation ensued, one pirate was apprehended in a suburb of Awoye community in Ilaje Local Government area of Ondo state.

The Hope Metro gathered from the commanding officer that the four Military rifles and seven magazines in the hands of the pirates is very dangerous to the people of the community.

The Naval boss who spoke with our correspondent said that the pirates killed four Ratings as they collected their guns and magazines during a duel where the team rescued three foreigners.

According to him, they got hint from one of the pirates that was apprehended that the rifles are in the community as the foreigners that were rescued also aided the information.

” We intimated them on what is at stake. It is like sleeping on a time bomb. I told all the Baales to get all their youths and speak with them.

“That was why we did a total search and we found four telephones and one walkie-talkie  belonging to the foreigners . I made this known to the four baales from the community

“We also made a search on the boat they came with from Bayelsa, we were able to recover empty magazines from guns on the floor of their boat. We place a curfew in the four communities and on the activities on the waterway by putting pressure on them to produce the arms because it is a treat to the innocents in the community, ” He stated.

According to source, The Hope Metro gathered that this development has put the community under tension while  it paralysed economic and social activities in the community.