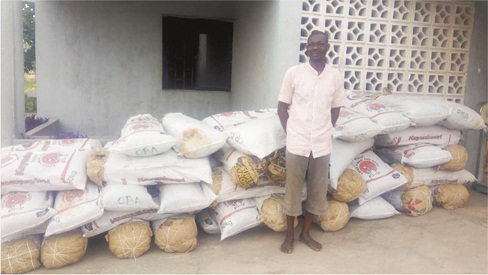 Osue was reportedly arrested following a tip-off from worried residents of Igoba community in Akure, the Ondo State capital.

The Hope Metro authoritatively learnt that the subject is being held at the Command headquarters, Alagbaka, Akure

A source told our correspondent that NDLEA agents trailed Osue for a while, before raiding his home at about 8am, where they were said to have found at least 624Kg of illicit drugs.

A resident of the community who does not want his name mentioned claimed to have witnessed the arrest, saying the NDLEA combed several homes in the area and questioned several occupants before arresting Osue

“People in this area have been very careful about complaining to law enforcement agencies about the activities of  these drug dealers, because such people can be very dangerous. “If they get to know that you reported them, you could be harmed. People are living in fear. So the NDLEA should save us and save Nigerian youths.”

Speaking with the Ondo State NDLEA Commander, Mr Haruna Gagara, who encouraged individuals in the state to always report promptly any suspicious activity said: I will advise those that are into this illicit drugs to abstain from such.

“Most importantly, for the security of our youths, drugs trading in our society should be reported immediately.