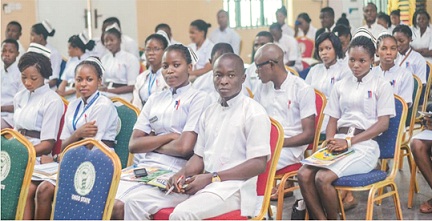 By Kemi Olatunde
|
Last week was a very busy one for members of the Ondo State chapter of the Nigerian medical Association (NMA) as it had her 2018 Annual General Meeting and Scientific Conference.

Each of the days  had activities lined up for members to give back to the  society, to brainstorm on way forward and also to equip themselves  with current knowledge needed to function well in their field.

The week long event had its theme as “Health Care Decay, the way forward” with other topics as its sub theme.

Each of the topics was well researched and delivered by experts in the profession.

The  NMA week was a fun filled one as family members, friends and well wishers joined the celebration train.

Among the dignitaries that graced the occasion was the state Deputy Governor, Hon Agboola Ajayi who was on ground to declare the event opened.

In his opening remarks, the outgone chairman, Dr. Zachariah Gbelela hinted that no fewer than 550 patients benefited from the cooperate social responsibilities of the association during the medical outreach to  Ese-Odo Local Government at the commencement of the week long event.

He noted that the yearly event gives  members the privilege of  becoming better not only in their clinical practices and attitude to work but also in updating their knowledge in current trends in patients care.

Gbelela who revealed the numerous achievements of his administration commended the Contributory Health Scheme initiative of the present government in the state and however called for the employment of more health workers among others.

His words: “The uncontrolled activities of the  Traditional Birth Attendants (TBA) and mission homes is a great concern to the NMA. Almost on daily basis, our hospitals are bombarded with cases of ruptured uterus, post partum hemorrhages and other complications related to unskilled attendants.

“Government should arrest the ugly situation as pregnancy should not be seen as a death sentence”.

While speaking  further, he said;  “according to Medical Tourism Association, Medical Tourism is the process in  which patient travels to another destination for medical or health and wellness services.”

He  listed long waiting lists in procedures, unavailability service, high treatment cost, desire for privacy and lack of  insurance cover for the health service procedure among others as the main drivers in source countries of medical tourism.

According  to him, the main drivers in destination countries of medical tourism include; lower cost, less treatment period, improved technology, high quality standard healthcare and short waiting  time  among others.

In Nigeria, its main drivers according to the lecturer include, brain drain syndrome, underfunding, obsolete medical equipment, industrial strike deplorable state of healthcare facilities and dilapidated structures and negative attitude of health professionals among others.

However he called on government at all levels to adequately fund the system so as to have an improved Health Care facilities and medical equipment.

His words: “In Nigeria, there should be a routine maintenance of   facilities, functional accreditation system, increased and improved medical research and also encourage foreign investors, “he advised.

While speaking further, he hinted that his tenure would ensure an improved interpersonal relationship among Doctors and also shun inter professional rivalry saying “We will carry other health workers along in all we do so that they can have a sense of belonging.”