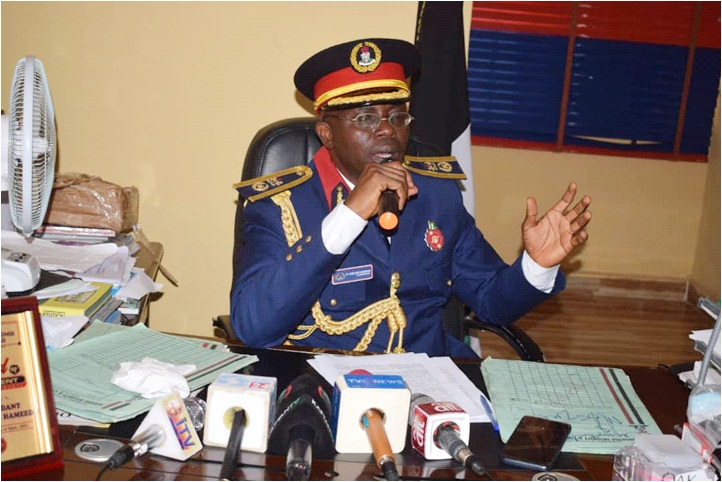 Commandant of the Ondo State Command of the Nigeria Security and Civil Defence Corps (NSCDC), Dr Hammed Abodunrin, has thanked the state Governor, Arakunrin Oluwarotimi Akeredolu over the unflinching supports the Corps enjoyed under his administration.

Abodunrin who stated this while addressing Journalists on the Command’s achievements in the year 2021, said the relentless and unflinching supports rendered by the Akeredolu-led administration provided the command with the necessary avenue to function effectively and enable it record many feats.

The command also revealed that plans were underway, to give journalists in the state training on Personal Security and Peace Journalism, just as he called for more robust relationship and partnership for better results.

Reeling out the Command’s achievements in the year ended, he revealed that it has handled 1,725 cases, arrested 124 suspects and impounded 284,540 litres of petroleum products in 2021.

He stated that some of the cases included 19 cases of illegal dealings in petroleum products, 17 cases of  malicious damage of farmlands, 10 cases of illegal mining two illegal operations of Private Guard Companies,  eight cases of stolen prepaid meters.

Others, according to him, included; 12 robbery cases, 11 missing children, 27 sexual assault/rape, child trafficking, five job racketeering cases among others.

He explained that in the year under review, 124 suspects were arrested by the Intelligence and Investigation Department of the Corps while 20 of the cases were pending in  court.

He added that 284,540 litres of petroleum products were recovered, while nine trucks were impounded alongside  four wooden boats from the Coastal area of the State.

He also revealed that the Anti-Human Trafficking and Irregular Migration as well as Gender Unit handled 185 cases, 140 arrest were made with four of the cases transferred to NAPTIP and two transferred to Ministry of Women Affairs and 157 of the cases were settled/resolved.