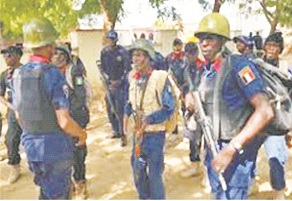 Commandant Phillip Ayuba,  stated that Bonzue Global Security services limited, is not registered and  licensed to operate as a Private Guard Company.

According to him, the statement was necessitated by a number of paid advertisements carried out recently by the company on radio and television, purposely to deceive unsuspecting members of the public into patronage.

He affirmed that the action of the company involved in the illegal operation contravened sections 1(a) & (b) of the Private Guard Company Act, 1985 and Section 3 of the PGC Regulations, 2018, and that the Command would arrest any person associated with the Security Service.

He, therefore, warned members of the public to exercise restraint when engaging the services of security guards and be careful not to fall in the hands of criminals who have no business i security.

He encouraged citizens of the state to approach the Association of Licensed Private Security Practitioners of Nigeria in the state, to get the names of all the  Registered members or the PGC Department of the NSCDC in their locations for same, saying anyone who engages in the blacklisted company does so at his or her own risk.