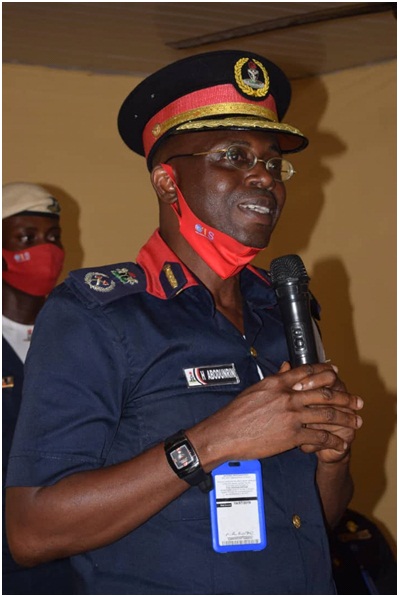 General, Ahmed Abubakar has been appointed as the new commander of the Nigeria Security and Civil Defence Corps, Ondo State Command.
The Command’s Public Relation Officer, DSC Olufemi Omole in a statement made this known to The Hope Metro yesterday.
Commandnt Abubakar takes over from Commandant Emeka Ederiabu Douglas, who has been deployed to Lagos command.
While addressing the Officers and men, the new Command helmsman, Commandant Abubakar said the Command under his watch will keenly carry out the plans and programs spelt out by the Commandant General, Dr Ahmed Abubakar Audi mni.
He promised to work with the state government as well as collaborate with other sister agencies and all critical stakeholders to make Ondo State a safer haven for the dwellers; stressing that a new Sheriff is in town, hence all criminal minded persons should either relocate or face the full wrath of the law.
He said he would reposition the Corps to an enviable position.
In his remarks, the outgoing Commandant, Mr Eweka Edenabu Douglas thanked the officers and men for their dedication to duty and cooperation during his tenure of office.
“I must on a sincere note appreciate the Head of Departments, Units, Area Commanders, Divisional Officers and the entire officers and men for the unflinching support given to me for the past seven and a half months of being your Commandant. My advice to you is that you should double your level of cooperation with your new boss,” he said.
The highlight of the occasion witnessed the signing of the handover note, change of Guard and the official handing over of the permanent site office complex of the Command located at Oda Road, Akure.