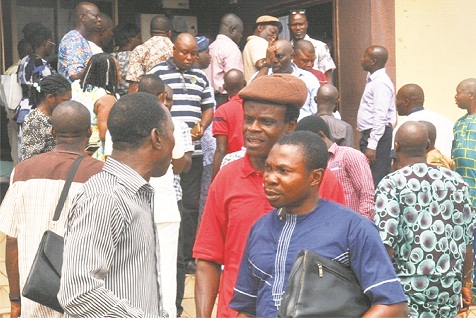 Chairmen and Secretaries of chapels in the state council made this request after their election scheduled for last Wednesday was abruptly cancelled.

According to a statement released after the meeting which was signed by nine out of eleven chapels, stated that the decision was in line with Article 5D (9c) page 19 of the NUJ constitution.

It would be recalled that an Industrial court sitting in Akure last month (October) dissolved the executives of the union, led by Mr James Sowole and ordered that a fresh election be conducted within 30 days of the judgment which elapsed on Wednesday.

One of the chairmanship candidates, Mr. Tony Adetoye of the State Ministry of Information chapel had dragged the Sowole-led exco and the then electoral committee, NUJECO to court for screening him out unlawfully in the election.

The election scheduled for November 14, 2018  was aborted due to perceived irregularities by some chapels of the union.

Journalists across the 18 local government areas of the state had converged at the state Press Centre in Akure to exercise their constitutional rights.

The Hope gathered that some journalists believed that the lists of some chapels was doctored claiming that non members were brought to vote in the election.

They claimed that administrative officers and drivers from the local government chapel were mobilized for the election.

The local government chapel on the other hand claimed they were full-fledged members of the union and they pay their dues regularly.

The argument which lasted for hours was temporarily resolved when an emergency meeting between chapel chairmen was called and  they unanimously agreed that the election should proceed but was interrupted again as Adaba FM chapel started their accreditation.

An Information Officer with the state ministry of Information while expressing his dissatisfaction about the election said he saw his brother who is a driver and also a secretary at the local government with NUJ biometric cards to vote as journalists.

Some information officers from the state ministry of information insisted the designation of members from local government chapel be made known, noting that a conversion letter could be forged.

The prerequisites for voting which was adopted are; NUJ biometric card or organisation ID card or last promotion letter or letter of conversion didn’t go down well with some journalists.

Some were of the opinion that the NUJ biometric card is the only authentic card that makes someone a journalist.

“If you’re stopped by police and asked to identify yourself, will you present your last promotion letter or conversion letter to them?.”

While some said since the biometric card was not used at the national delegates conference of the union, it must not be imposed or made compulsory for the state election.