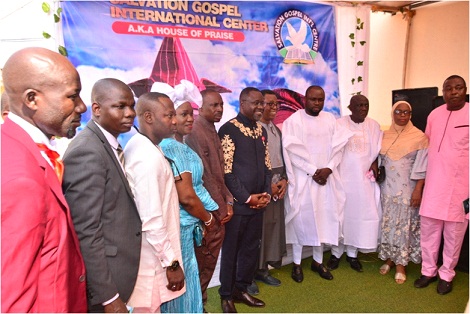 As part of activities lined up for the 2022 press week celebrations, the members of Nigeria Union of Journalists, (NUJ), Ondo State council trooped out in large numbers to attend the thanksgiving service which took place at Salvation Gospel International Center, Akure, the State capital.

The Press Week Service coincided with the 4th Anniversary of the Church which was also attended by Bishop Felix Adejumo who is the president of Agape Christian Ministries; the Olurese of Irese in Ifedore LGA and the Olu of Aladodo Isinkan in Akure South, Ayodeji Fatoki as well as the Acting Permanent Secretary of the State Ministry of Information and Orientation, Mrs Toyin Onisile; the SSA to the State Governor on Media & Publicity, Mr Ojo Oyewamide and the immediate Past Chairman of the Union, Mr Tona Aderoboye.

In his sermon, the Senior Pastor of Salvation Gospel International Center, Akure, Pastor Mike Foluso expressed his happiness to receive the journalists in the church again, stressing that the church is so privileged as other churches are looking forward to have them but they gave the church a second chance to have them.

“This is their home, next year, we are expecting them, we love seeing them around. I pray that God will continue to uphold them”

Pastor Foluso advised the press men to keep doing good saying that there are some bad eggs among them, urging “those people that are reporting fake news about men of God to stop such acts because it is not helping the body of Christ, they should always commend the work of clergy men, encourage them.”

The Chairman of NUJ, Prince Leke Adegbite while appreciating God Almighty for giving the press men the opportunity to celebrate another press week, noted that thanksgiving service is the kick off of the annual press week celebration.

“This is to give thanks to God for sparing the members’ lives and to also pray that the week is successful.”

Adegbite who appreciated the senior pastor of the church for giving the press men opportunity to have their thanksgiving service in his church, also appreciated the members for the support they have been giving to him and the excos in the last five months they assume office.

“I’m happy with the large turn out today, it is unprecedented, I appeal to them to be active in all the remaining programmes of the week. As the general election is coming, I appeal to them that they should do their jobs according to the ethics of our profession,” the NUJ Chairman said.