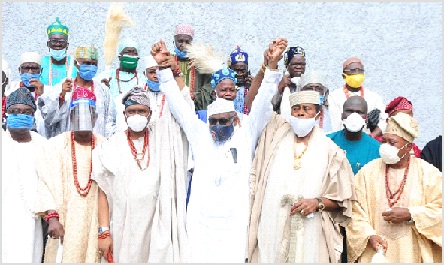 Traditional rulers across the 18 Local Government areas of Ondo State under the umbrella of Ondo State Council of Obas have endorsed the second term aspiration of Governor Oluwarotimi Akeredolu.
This development followed what the royal fathers described as sterling performances of Governor Akeredolu across all critical sectors of development.
The monarchs pledged their loyalty to Akeredolu and promised to work for his re-election bid come October 10, 2020 governorship poll.
The Chairman, Ondo State Council of Obas and Olugbo of Ugbo Kingdom, Oba Frederick Akinrutan, while speaking during the monthly meeting of the State Council of Obas in Akure, informed that all the royal fathers in the state have unanimously endorsed the Governor for another term.
Olugbo disclosed that the council of Obas in the state has already set up a committee in the three senatorial districts to work on the emergence of Governor Akeredolu in the coming poll.
“All the 18 Local Government Obas in Ondo State have agreed to support Arakunrin Oluwarotimi Akeredolu for his second term in office” he said.
Accordong to Oba Akinrutan, those who are contesting against Governor Akeredolu are wasting their time and resources, adding that the landmark achievements of the Governor in all areas would easily give him victory at the poll.
“Arakunrin has done well. Look at the roads in Akure, in Okitipupa, in Akoko. We have three senatorial districts. On the 10th of July, we are coming here for a meeting to talk about how Akeredolu will emerge. He will complete his eight years in office,” he stressed.
Speaking one after the other at the meeting, other traditional rulers representing each senatorial district, said there was no need heating up the polity when the incumbent governor is performing creditably well.
The Olubaka of Okaland, Oba (Dr) Yusuf Adebori Adeleye, took time to justify the position of his fellow Obas to reel out various life-changing interventions of the Akeredolu led Administration in the Northern Senatorial District.
The Olubaka said the multiplier effects of road infrastructure both completed and ongoing across the Northern Senatorial District, remodeling of schools, provision of quality healthcare to the people and the monumental efforts at the Adekunle Ajasin University, Akungba Akoko, are unprecedented.
Also speaking on behalf of his fellow Obas in the South Senatorial District, the Abodi of Ikale, Oba Babatunde Faduyile noted that the resolve to support Arakunrin Oluwarotimi Akeredolu for a second term in office as governor of the State is well-thought-out in the interest of the people and the progress of the state.
The royal father said with leans resources, Governor Akeredolu is bringing enduring development to the doortsteps of his people at a pace least expected, adding that the Southern Senatorial District cannot afford a truncation of the various laudable projects particularly the Port Ondo and the Araromi Seaside road project.
On his part, the Deji of Akure, Oba Aladetoyinbo Aladelusi, who spoke on behalf of royal fathers in the Central Senatorial described as iconic the achievements of Governor Akeredolu in Akure and other areas, adding that Akure people are solidly behind him for giving them UNIMEDTH and among other infrastructural development.
“He has done a lot in Akure. Anywhere I go, I tell them Akeredolu has done great things in the State. Look at the reconstruction of our Hospital, construction of roads. I have been praying for him and I will continue to pray for him,” he said.
Responding, Governor Akeredolu who could not hide his joy, expressed his gratitude to the royal fathers for their endorsement, adding that no endorsement could be better than that.