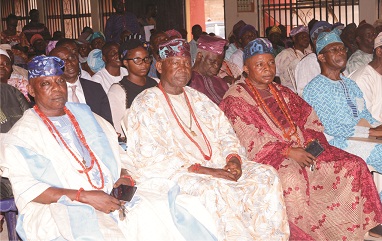 By Kehinde Oluwatayo
|
When government is too far from the people, there is bound to be marginalisation and neglect of the minorities as a result of factors like distance, their voices not being heard probably because of their number among other things leading to underdevelopment of such areas while the majority will always have  their way using the common resources to their own advantage. This has always resulted in agitations from the minorities to own their government.

Communities in Ondo State like any other communities anywhere jumped at the opportunity to own their government when the State Governor, Arakunrin Oluwarotimi Akeredolu, declared his intention to create Local Council Development Areas (LCDAs) from the existing 18 local governments in the state.

Bringing government closer to the people will no doubt engender development, since the people can play the necessary supervisory role over it and develop at their own pace.

The state governor did not waste anytime; he swung into action and on March 19, 2019, an 11-man committee was inaugurated headed by Prince Adelanke Odogiyan as chairman while Dr Deji Akinwalere was appointed as the secretary with nine others as members.

The committee was given three months to  recommend LCDAs creation within the state. They swung into action and announced that memoranda should be submitted within 25 days from the day of the announcement.

Within the 25 days, the committee had received 94 memoranda, according to the chairman of the committee, Prince Adelanke Odogiyan, and May 13 through 20 was fixed for public hearing on the creation of the LCDAS.

The public hearing was an avenue for sponsors of memoranda to state reasons why their proposal should be considered. It was also an opportunity to make clarifications, amendments and correct some anomalies.

At the opening ceremony of the public hearing, the Chairman of the committee, Prince Odogiyan, reiterated that the creation of LCDAs in Ondo State is not to boost the image of any political figure but to bring government closer to the people for development.

He urged the people to see the opportunity as an avenue to own their government, supervise it so that dividends of democracy can be made more realistic in the lives of the people.

One of the members of the committee, Sir Charles Titiloye, was always on ground to tell the people the rules of the game. Five minutes was given to whoever comes out to present the memorandum who must be one of the sponsors and who duly signed it. After that questions would be asked from him by members of the committee while questions from the public would come later.

Another very important requirement is facility to take off, since government is not ready to start to build structures for anyone. Most sponsors already have facilities for takeoff either donation from individuals or community properties. Some have even contributed money for construction of facilities and are only waiting for approval of government.

There is no doubt that the people believed in both the committee and the goverment of Arakunrin Oluwarotimi Akeredolu with the mammoth crowd on ground including the monarchs, high chiefs, academia, captains of industries among others to welcome the committee as it took the public hearing through the 18 local government areas of the state.

The first port of call was the Akure City Hall, where Akure North, Akure South and Ifedore local governments were billed to present and adopt their memoranda. A total of six LCDAs were proposed to be created from Akure North, including Akure North East, Iju/Itaogbolu, Akure North Central, Isokan, Ogbese/Igbatoro and Oredegbe.

A total of five LCDAs were proposed to be created from Ifedore Local Government, including Ifedore Central, Ijare, Ifedore, Ifedore West and Ifedore.

On the same day, the train also visited Idanre Local Government, where one memorandum was jointly submitted for four LCDAs, which include Idanre North, Idanre Central, Idanre East and Idanre West.

During the presentation, it was observed that some proposed LCDAs bore the same name with different headquarters while some the same headquarters. In such cases, sponsors were advised to go back and make the necessary correction.

In cases where there was disagreement, sponsors were also advised to go back and settle.

On the second day, the public hearing continued with a visit to additional four local governments, where 20 LCDAs were proposed for creation.

In Ileoluji Okeigbo Local Government, two LCDAs were proposed to be created from it, and they include Okeigbo LCDA and Ileoluji West.

Speaking earlier with the people, the chairman of the committee said government policies will be better executed and rural areas will develop to prevent rural urban migration when eventually created.

In Ondo kingdom, the Sasere of Ondo, High Chief Olusola Adeduro, said the idea is a good one and highly supported by the Osemawe of Ondo kingdom, Oba Adesimbo Kiladejo.

Representative of the Jegun of Ileoluji, Oba. Olufaderin Adetimehin, the Lisa of the town High Chief Akin Fagbamiye said the idea will bring development to the communities.

Describing the programme as a welcome development, Fagbamiye stressed that it will ensure the people get the dividends of democracy, adding that the most important aspect is viability.

No fewer than 23 LCDAs were on Wednesday proposed to be carved out of the existing four local governments of Okitipupa, Eseodo, Irele and Ilaje, as the public hearing committee moved there for the exercise.

In his welcome address, the chairman of the committee, Prince Adelanke Odogiyan, said government is aware that agitations for LCDA creation had been on for decades in different parts of the state.

Speaking with The Hope shortly after the exercise, one of the sponsors from Arogbo Ijaw Kingdom, High Chief Jibowu Williams, said the people have been on the struggle for more than four decades and pleaded with the government to ensure the physical manifestation of the exercise.

“This is not the first time we will experience this. We experienced it during the administration of Governor Adebayo Adefarati and that of Dr Olusegun Mimiko and none came to manifestation.

“We are pleading with the Governor, Arakunrin Oluwarotimi Akeredolu, not to allow this one to end the way others ended. We are passionate about it. It is a fundamental desire”, he appealed.

Describing the programme as a wonderful one, Williams prayed that God will give the governor the wisdom to drive the process to a logical conclusion. A total of 20 LCDAs were proposed to be created from the four  local governments of Akoko South East, Akoko South West, Akoko North West and Akoko North East, when the committee on LCDA creation had public hearing in the area.

Chairman of the committee, Prince Adelanke Odogiyan, assured the people that the programme is a well intended one, adding that justice would be done on their memoranda.

According to him, the committee has so far received about 97 memoranda, adding that some of the memoranda are requesting for four to five LCDAs making about 105 proposed LCDAs.

At Akoko North East, the first memorandum was requesting for the creation of three LCDAs, all bearing the same name Ikare West with the headquarters in Okoja.

While three memoranda bearing Isowopo LCDAs has different headquarters of Akunnu Akoko, Auga Akoko and Ise Akoko, making the total of six LCDAs to be carved from Akoko North West.

The Owa Ale of Ikare, Oba Adegbite Adedoyin, described the step as important as it will bring government closer to the people.

He called on the committee to speed up the process for governor’s assent.

Also speaking, the Asoju Oba of Ikare, Chief Olabisi Babajide, said the people had worked hard to ensure that the proposed LCDA creation by the state is possible and workable knowing full well that it will bring government closer to the grassroot.

“We are particularly impressed, I expect that Akoko North East where I come from be divided into two or three because of their large expanse of land and that government will accord them the necessary priority”, he prayed.

One of the questions agitating the minds of the people is that this is not the first time a committee on LCDA creation would be set up with public hearing held in all the local governments in the state. They need to be sure that it will not end like the ones before it ended

With this, the committee has covered 16 out of the 18 local governments in the state and it is left with Ose and Owo to be covered on Monday.

Odogiyan assured the people of equal treatment and that the committee will not exceed the time given to it.

He said the committee will go back and re-read the memoranda and make recommendations to the government.