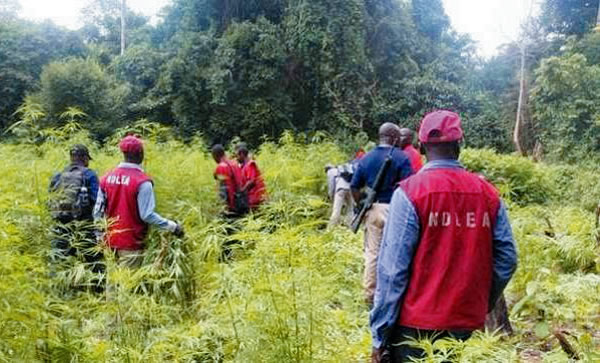 By Micheal Ofulue
|
As the operatives of the National Drug Law and Enforcement Agency (NDLEA) in Ondo State continue in their fight against hard and illicit drugs, the State Police Command has joined hands with them in flushing out cultivators, dealers  and smokers of Cannabis Sativa (India hemp)in the state.

A middle-aged man was nabbed in Akure the Ondo State capital, last week, for allegedly dealing in Cannabis Sativa weighing about 642kgs,  arranged in bags possibly for sales.

His arrest came barely a month after  four operatives of the NDLEA were killed at Ifon in Ose Local Government  Area of the state by suspected gunmen believed to be drug barons.

The State Police Public Relations Officer, Mr Femi Joseph, who spoke to The Hope metro said  police are collaborating with NDLEA to ensure that those planting, selling and dealing in  Cannabis sativa in the state are checkmated and brought to book.

His words, “There is effective synergy between the police and the NDLEA. We have been working together in ensuring the state is rid off hard drugs

“Those who sell, smoke or deal  in  Cannabis sativa are said to have committed the same offence,  because people who smoke are proned to committing  crimes.

“This is why sometimes you see the police raiding some black spots in order to apprehend those smoking India hem.

“Whenever we arrest them, we hand them over to the NDLEA whose primary duty is to carry out further investigations and prosecution.

“Though police as an institution is saddled  with the responsibility of maintaining law and order,  we equally have the right to also investigate and prosecute offenders when arrested.

“We usually have a joint operations in tackling drug menace in the state. But  we equally call  on the members of the public with useful and adequate information to pass it to us because the job of effective crime prevention, detection,  control in the society is for everybody not for the security agencies alone,” he stated.

According to the PPRO, places like Ogbese, Ala in Akure North and  Ifon in Ose local government areas of the state, where there are cultivation of Cannabis Sativa, the Divisional Police Officers in those areas have been told by the police authority to be vigilant and proactive so as to arrest those behind the planting and growing of India hemp and also bring them to book.

He said the police will not relent on its efforts in aresting and prosecuting criminal elements who wants to reap where they did not sow, adding that all identified criminal hideouts in the state would continue to be raided until sanity is restored to those places.

Ondo State, The Hope  Metro investigation gathered, has been rated as one of the largest cultivators of Cannabis sativa in the South West.