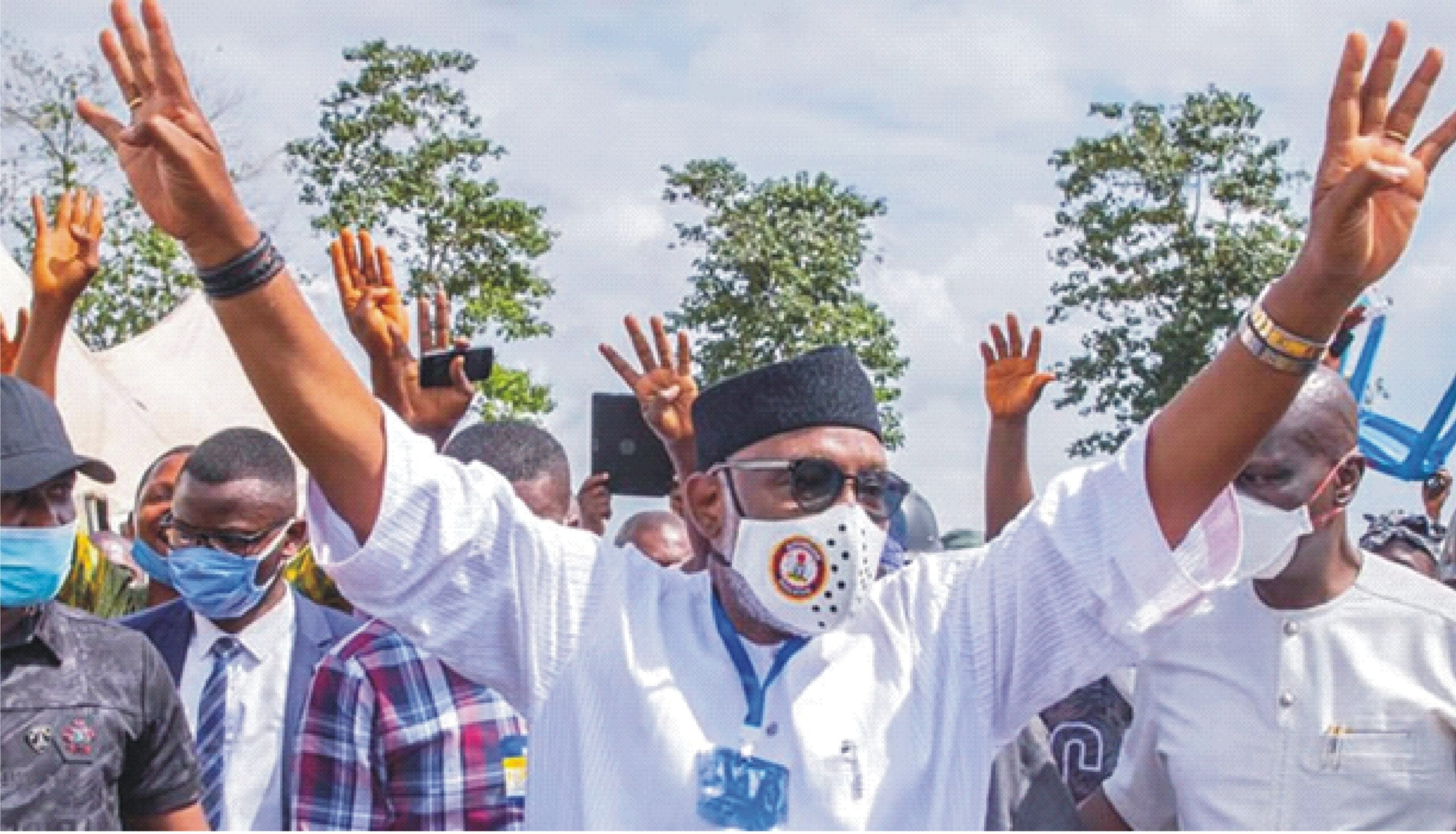 Arakunrin Oluwarotimi Odunayo Akeredolu (Aketi), SAN, was/declared the winner of the Ondo State Gubernatorial Election, held on Saturday, October 10, by the Independent National Electoral Commission (1NEC).
This victory in the guber poll did not come to me as a surprise. I had earlier in an article published by The Hope Newspaper, in August, stated categorically and emphatically, that Governor Akeredolu’s journey to governance in Ondo State is divine, and that he and his party, the All Progressives Congress (APC), will beat the PDP and the ZIP to the second and third positions respectively. This is exactly what has happened. How prophetic I was!
For keen political observers and other stakeholders, the handwriting has been on the walf]?ince, and it is only the political layabouts^arfcfaoubting tfiomases that had refused to see Akeredolu’s victory coming.
The giant strides Akeredolu’s government has made in Ondo State in the last three and a half years, is eloquent testimony to the innovative instinct of the Governor. This Government has constructed good and quality roads across the length and breadth of Ondo State. The scope of the hospitals and other health facilities in the State<&*ve been expanded and are functioning.
In bringing development to the people in any community and state, accessible roads are paramount; the next is health facilities. Akeredolu’s government has provided these to the nook and cranny of Ondo State. The people have continue to cherish these infrastructures and yearning for more of them.
The government has also worked assiduously to see that the farmers are supported in providing food security in the State. Various seediings and other agricultural input are being distributed to the farmers from time to time. Every citizen of the State is being sensitised and encouraged to go into farming.
On Security, the Akeredolu government has ensured that peace and tranquillity continue to prevail in the State. The Amotekun Security outfit was initiated to assist the Nigeria Police in combating crime; maintaining law and order and protect lives and property.
In the education sector, the Government has provided quality education to the people of the State. The primary schools across the state that were neglected for eight years by the last administration, have been renovated and are now wearing new look, and even new ones have been built. Secondary schools is the next focus.
The State’s tertiary institutions have been elevated to meet the standard that will enable them to be really called higher institutions of learning.
What is more, the State’s workers’ salaries are being paid as and when due. All these amongst other laudable projects, Akeredolu’s government has wrought in the State, despite the lean resources of the State.
The Government has provided potable water, via boreholes for both the rural communities and the urban cities in the State. The Government also completed and commissioned a major Water project in the Southern Senatorial district of the State.
Industrially, Ondo State is getting set to join the league of Industrialised States in Nigeria. The Okitipupa Oil Palm that was abandoned by previous administrations has been revived and is now functioning. The factory in Ore, where heavy trucks and tankers are being assembled, among other factories, are facts that Governor Akeredolu is well on course.
Therefore, it is my belief that Akeredolu has done marvellously well, and 1 commend him for his vision and tenacity of purpose.
What of his unrelenting pursuit and exploration of the numerous mineral deposits in the State. This Government has done it with candour and vigour, a la bitumen and the Ondo Port projects – the two most important projects that will change the face of Ondo State permanently, and make it one of the Industrial hubs, of not only in Nigeria, but in West Africa.
No doubt about it, on these and other dividends of democracy that have been provided in the last three and a half years, Governor Akeredolu has performed. He
has worked like a Trojan and succeeded. He has brought good faith to governance, and defended his policies stoically.
Though the opposition parties and some of their misguided supporters refused to acknowledge these facts, the generality of the people of Ondo State have spoken with their unflinching support and votes last Saturday, which resulted in a resounding victory for Akeredolu.
The road ha^ been rough though, with a lot of political landmines laid by opponents, both within and outside his ruling party, but Akeredolu has fought like a General and overcome, and the truth has triumph over falsehood; reality has prevailed over political propaganda.
I applaud his tenacity and doggedness, and reaffirm that Governor Akeredolu definitely deserves his victory.
As I join the people of Ondo State and other well-wishers of the State all over the Country, in congratulating Governor Akeredolu on his victory at the poll, I wish to
T*^
advise him that^this second coming of his administration, a special focus should be placed on the full exploitation of the Bitumen being worked on in the Southern Senatorial District of the State, so that it can on stream in earnest. He should also see to it that the Ondo Port project becomes a reality and not just a dream, before the expiration of his second tenure.
If Arakunrin Akeredolu is able to achieve these lofty projects, his name will be etched in Gold in the annals of Ondo State. He will join Papa Adekunle Michael Ajasin, as the Greatest of all of them (The GOAT) – of all those that have governed Ondo State -both in the Military and Civilian dispensations.
Once again, I say Congratulations to Arakunrin Oluwarotimi Akeredolu, vMr. talk and do’, and the good people of Ondo State for this victory.