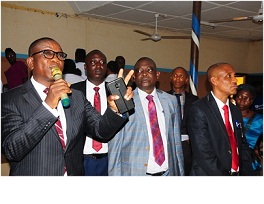 By Bukola Olamona
|
A total number of 9,704 workers have been promoted across Ondo State  Public Service in 2019.

The Chairman, State Civil Service Commission, Dr Afolabi Adewakun  disclosed this at a press briefing on the 2019 promotion exercise in the state.

The breakdown of the promoted staff according to the chairman include  2,261 from the mainstream civil service and 7,443 from Board, Parastatals and Agencies of  government.

Adewakun who said the welfare of workers has continue to be on the front burner since the inception of the Governor Oluwarotimi  Akeredolu’s administration, added that training and retraining of workers have engendered higher productivity.

He stated” in the light of his worker friendly disposition, Mr Governor graciously approved the special promotion of one grade level credit for three deserving Civil Engineers in the Ministry of Works and Infrastructure for carrying out extensive cost saving road rehabilitation works across the state”.

Adewakun said that promotion is not automatic, adding that  between January and October 2019, about 190 officers across the various cadres in the civil service have been given approval to retire either mandatorily or retirement after a meritorious service to the state.

On discipline, Adewakun said cases ranging from financial embarrassment, prolonged absence from duty without official permission, to general misconduct have been looked into by the commission while sanctions such as reprimand ,written warning and down grading have been meted on erring officers.

The Permanent Secretary of the commission, Mrs Folasade Adegoke said those promoted were on merit, adding that workers should justify the promotion given them by working hard.