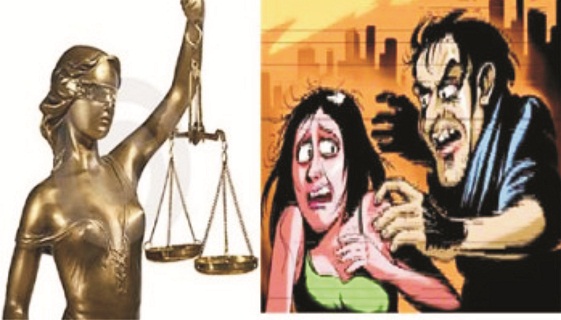 By SunmolaOlowookere
|
Following allegations of a reign of terror in a suburb of Ondo town, Ondo state, a man in his early twenties, Adedotun Moses is to spend the rest of his life behind bars after he was sentenced to seven years imprisonment for membership of a cult group and life imprisonment for rape by an Akure high court Judge, Justice Samuel Bola.

Following a diligent prosecution by one Mrs Stella Adegoke, a Deputy Director in the Department of Public Prosecutions, Ministry of Justice, the judge held that the accused was indeed guilty as he was charged and invoked the maximum sentence stipulated by the law for the two charges against him.

On the first count, he was found to be a member of a cult based in Nasarawa called “Arogbale” on the 12th of July, 2017 and was accused of using his membership of the cult to terrorize his neighbours.

On the second count, the accused person, Adedotun Moses was alleged to have forcefully had carnal knowledge of a student of Adeyemi College of Education who lives off campus, one Miss Suara whose first name was withheld during the court sitting for specific reasons at no. 21, Oluwabamise, Bethlehem Street, Ondo on the 8th of July 2017.

While giving evidence before the court, the victim narrated the ordeal she went through at the hand of the accused person, a neighbour who lived near her house and who was reported to be a notorious cultist and thug that threatened the women living in the vicinity.

She narrated the series of extortion and intimidation she faced with the accused who usually bully male and female alike and intimidated them by bragging that he was a cultist.

On the fateful day she was raped, she narrated how he lured her into his room on the pretext of sending her to buy him groundnuts, directing to wait for him in his room as soon as she came back with the groundnuts.

She said she met a guy in his room when she entered but that he had sent the guy out of the room when he came in.

He said that he told her that he was going to rape her and she started to beg him. She stated that he refused to listen and stripped her of her underwear while threatening her with a cutlass and then had carnal knowledge of her.

She testified that all through the ordeal, she pleaded with him that she was a virgin but that he would not be dissuaded from his evil decision and went until he ejaculated inside her.

She said further that when he got off her, he forced her to stay indoors and stated that he would still have more of her after he had taken some fresh air outside and had gone outside while shutting the door on her.

She said that it was then that she summoned the courage to use his phone which he left inside the room to call her roommate who later came with other neighbours to confront him and rescue her.

She claimed that she went to report him to the Student Union Government’s president who came the next day to arrest him and handed him over to the police.

Then, she said she was taken to the school clinic for examination and treatment.

While reading the judgment, Justice Bola stated that the doctor, Adekunle Adedayo while testifying in court said that the victim came with her pants which had blood patches on them and complained that she was raped.

The doctor had also stated that physical examination of the girl revealed a roughly ruptured hymen which was still tender and that the victim complained of pains around the area which signified a forceful entry.

During the course of the trial, the prosecuting counsel, Mrs. Stella Adegoke, called the Investigative Police Officer to the witness stand, one sergeant Vincent Okoro.

He told the court the court that the accused was brought to the Yaba Police station along with a cutlass by the security operatives of the school and was reported by the team to have raped a female student while he threatened her with a cutlass.

The prosecution also tendered the squeezed and stained underwear of the victim before the court and despite the objections of the defense, it was admitted as evidence and marked as exhibit.

The confessional statement of the accused was also tendered and the defense again objected saying that the statement was not obtained before the presense of a legal practitioner or a member of the accused family in order to forestall a situation of obtaining a statement under duress as dictated by the provisions of the Administration of Criminal Justice Law of Ondo state, Section 10 sub section 3.

Following submissions from both counsels, the court ruled that the statement be admitted due to îts weight though it was not made in the presense of a legal practitioner.

During cross examination by the defense counsel, the police witness further corroborated his testimony by saying that on the 8th of July, the accused was brought to the police station and that on the 10th of same month, the police had closed its investigation after visiting the crime scene with a team of policemen and security operatives from the college along with accused person.

He stated that he had gone ahead to take the statement of the accused without waiting for any representative when the father was called and he said he lived in Lafia, Nasarawa while complaining that he has enough problems without his son compounding them with a police case.

The prosecution then closed its case and the defense opened as the defense counsel, Abdulrahman Yusuf called the defense’s first witness, one Ayodeji Blessing of No 5 of the same street who claimed to be a prophetess and a trader.

She claimed to know the accused as a caretaker to her friend, one Sister Lomi who lived in the same house with the accused and that she had come to demand for the repayment of a debt which her friend owed her when she saw about ten young men stormed the compound demanding for the accused while wielding whips, sticks and cutlasses and had begun to hit the accused as soon as he showed himself to them.

She narrated that the mob had stripped him naked, beat him some more, made him to lie in a muddy gutter before ordering him to dress up again, tore his trousers with a cutlass and took him away while he kept demanding to know what his offense was.

During cross examination by the prosecuting counsel, the witness admitted that she was not aware that the accused was being tried in court for cultism and rape and had only come to testify about what she saw. She also said that she had not seen her friend who lived in the same compound since the incident happened.

The judge stated that though the accused had claimed that his statement was obtained under duress, he however believed that the statement he volunteered to the police where he admitted to being a cultist to be true.

He thereafter held that from the numerous evidences before him arising from the exhibits and testimonies of witnesses, the prosecution has been able to prove all ingredients of the case against the accused person.

He stated that he does not believe the claims of the defense that he was innocent of the charges preferred against him while describing him as a pathological liar.

He stated that his violent nature and his clandestined activities proved him to be a cultist while recalling the evidence of one of the witnesses who testified that on one occasion, the accused had confronted her that she had offended the god of codeine whom he served and had extorted money from her before she was released.

On the weight of all the overwhelming evidence against the accused person, the judge had found him guilty on all the counts and sentenced him accordingly.