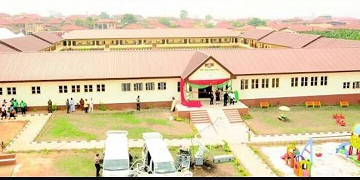 By Bukola Olamona
|
To make learning attractive and conducive for pupils in Ondo State, the state government is set to rehabilitate another set of primary schools in the state.

The State Chairman, Universal Basic Primary Education Board (SUBEB), Princess Oladunni Odu made this disclosure while speaking with The Hope in Akure.

She said at the last count, over five hundred primary schools have gone through complete overhauling in the three Senatorial Districts of the state.

The SUBEB boss maintained that what the state government is doing in the primary education sector is not just putting on structures, but putting a structure with befitting staff room, toilet and playing ground that will attract pupils to primary schools in the state.

She added that the state government has spent fortune in the sector by constructing fence round the rehabilitated schools to ward off miscreants and protect the pupils from any harm.

Odu added that the governor, Oluwarotimi Akeredolu has passion for education in the state, reason he has resolved to make primary schools attractive in the state.

“We have also given approval to schools in the state to embark on agriculture; this we think will boost food production in the state.”

Speaking on the welfare of primary school teachers, Princess Odu said that the present government has done much in that aspect, promising that the government is ready to do more.

“It gladdens one’s heart that the state government has been paying the salary of teachers as at when due and it is willing to do more as the economy of the state improves.

“Our teachers should reciprocate this kind gesture by putting in their best to impact knowledge on the pupils”.

On monitoring, she disclosed that the board will monitor teachers this year to ensure that they put in their best performances.

Cannabis: From bad to good