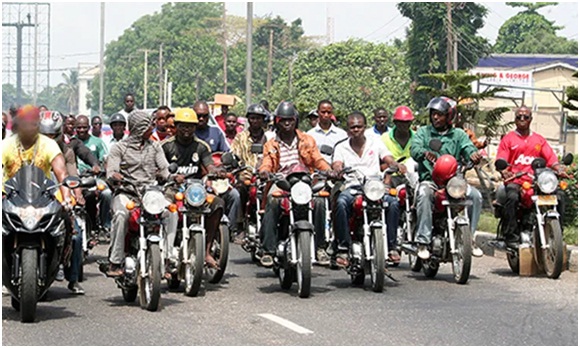 Residents of Akure, Ondo State capital have expressed concern over the influx of foreign okada riders into the metropolis.

Their worry is that majority of the riders are homeless migrants who loiter and sleep in market shops, schools and uncompleted buildings at night.

Residents who spoke with The Hope are afraid that the migrants constitute a big security threat when they are asleep.

Investigations showed that the wanderers are physically noticeable at Old Garage, Oba-Ile, Oke-Aro, Shasha, Ijoka, Road Block, Agbogbo in Akure and in Ore, Odigbo local government area of the state among other places constituting nuisance.

The findings also revealed that the migrants who are of Northern stock by language, physique and tribe have continued to pour into Akure on a daily basis.

An Okada rider, Mr Olaolu Orimoloye confirmed that the non native Okada riders have no permanent abode of residence and warned that danger might be lurking by their presence.

His words: “At night, you will see them in large numbers spreading their prayer mats at a spacious place in the street to sleep. The next morning they get up and continue the day’s job. This has been their usual habit and nothing has been done to correct it. Some of them also sleep in schools without gates. My fear is that they may pose security threat because incidents of robbery have been on the increase in Oke-Aro. One of them was arrested last year for stealing.”

Another Okada rider in Oba-Ile, Mr Olagoke Abiodun, matained that all foreign Okada riders don’t have any place of abode which make it easy for them to get away with any crime.

He said: “Most of them sleep in uncompleted buildings, some in a lonely place beside the bush. Sometimes November last year, about five of them were discovered to be sleeping in an uncompleted building in my area, at Owode, the community security sent them away and they never came to the place again. People just need to be very vigilant about happenings in their environment. Foreigners riding Okada are serious security threat because most of their Okada are not registered with any Okada associations in the state and cannot be traced.”

In the words of an artisan who also ride Okada along Agbogbo axis, Mr Kazeem Oloyede, disclosed that the lifestyle of an average northerner is to sleep outside the house and added that anyone who has been to the north would attest to this.

He called on security operatives to rise to the occasion going by the increasing crime rate in the state. He said, “I want to urge security operatives to also go after those foreigners who uses wheelbarrow to carry loads in the markets and those of them who are doing shoe cobblers. They sleep in different shops in the markets stealing what is available.

“The fear of most residents of Akure is that some of them who ride Okada does so basically to understand better the security architecture of a place in order to carry out nefarious activities and escape when they have to. That is why they tell passengers to always give them directions. They are in every location in Ondo State especially Akure the state capital. They sleep where the night meet them. On the streets, bus-stops, schools, uncompleted buildings, bushes among others. Amotekun should please address this security challenge before it becomes a serious security threat,” he said.

In the contribution of a Security Expert and Intelligence Consultant, Mr Adam Abuh, who advised that communities should form a vigilante groups to support law enforcement agents added that it should not be limited to foreign Okada riders alone.

“It is not enough to give resources to security operatives without the society taking active part to protect lives and property in their respective areas. Insecurity rate across the country is assuming a frightening dimension. Criminal elements have taken over every where. We should not profile anyone but be watchful to bring anyone caught to book.

“How are we sure that the local Okada riders are not the one showing them the way? For instance, how did herdsmen know our terrain before they start unleashing mayhem? This is why we should be careful and stop profiling but be very vigilant to arrest them and hand them over to the appropriate authorities.

Judges should also be up and doing. In a situation where criminal elements who should be jailed are released does not send warning to others. We must compel Judges to do the needful in order to rid our society of bad eggs.”

Reacting to the development, a former Commissioner of Education in Ondo State and an Afenifere Chieftain, Chief Femi Aluko, called on Amotekun operatives in the State to rise to the situation before it get out of control.

Aluko, who also urged residents to be vigilant and report any security breach in their environment to law enforcement agents added that security should be everyone concern and people should be ready to provide information in this regard to the appropriate authorities.

EKHA to enact law on medical check- up