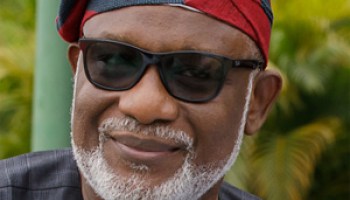 By Chris Chimezie
|
Ondo State Governor, Arakunrin Oluwarotimi Akeredolu (SAN), has reiterated the commitment of his administration to eradicate open defecation in the state so as to ascertain that people of the state have access to a healthy environment.

Akeredolu made this known while playing host to members of the Global Policy and Government Affairs Manager of Global Citizen who paid a courtesy visit to the Governor’s office in Akure.

He explained that the commitment was part of ongoing efforts made in collaboration with United Nations Childrens Education Fund (UNICEF).

The Governor also appealed to the federal government to build complete dams instead of leaving the reticulation to state governments.

He however, urged the Federal Government to collaborate with the state government and jointly tackle the problems with a view to achieving a desired and commendable result in the area of water provision for the masses.

Earlier, Leader of the group, Dr Okito Wedi commended Governor Akeredolu’s notable efforts geared towards ensuring that the people have unhindered access to potable water as well as a healthy environment which reduces the risk of contacting diseases.

She enjoined the Governor to make a commitment of 2 Million dollars per year for the next seven years to alleviate open defecation within the state.

Wedi hinted that the group are in the country to highlight transformational leaders who have been doing amazing efforts towards ending extreme poverty.

Wedi, therefore, invited Akeredolu to join late Nelson Mandela’s Centenary celebrations, where no fewer than 100,000 people would be in attendance.

Global Citizen is an advocacy movement essentially focused around ending extreme poverty by 2030 through the Sustainable Developmental Goals (SDGs) as the framework.