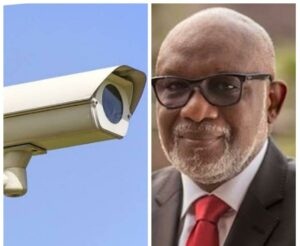 As the extended deadline for the installation of the Close Circuit Television (CCTV) Camera in all public and private institutions expires on Thursday, the state government has ruled out further extension.

Ondo State Commander of the Amotekun Corps and Special Adviser to the Governor on Security Matters, Akogun Adetunji Adeleye hinted this in an exclusive interview with The Hope.

Governor Akeredolu, had on June 26 signed an Executive Order for the compulsory installation and use of Close Circuit Television (CCTV) devices in all public and private institutions in the state.

The order gave one month deadline but was extended for another one month due to pleadings from the stakeholders for more time for effective installation of the devices.

The order was sequeled to the increasing spate of insecurity in the country, particularly the June 5 attack of St Francis Catholic Church,Owo where over 41worshippers were gruesomely murdered and the need to ensure security of lives and property in all public and private institutions and centres in the state.

According to the executive order ” it shall be enforced at all religious places of worship, financial institutions, event centres, supermarkets, educational institutions, Hotels/Motels, Guest House, inns, Restaurants, Clinics and Health Centres, eateries (of all kinds), recreation or vehicular parks and other places regularly used by the public.

A statement signed by the Chief Press Secretary to the Governor, Richard Olatunde, added that public/private institutions shall employ and maintain well-trained security personnel who shall man the entry and exit points to their various facilities/premises.

Violators of this Executive Order shall be prosecuted in accordance with Section 203 of the Criminal Code (Cap. 37) Laws of Ondo State of Nigeria.

Speaking with The Hope in Akure, Akogun Adetunji Adeleye described government’s gesture as magnanimous for it to have extended the deadline for another 30 days which would end by the of September.

According to him “as stated by the state Governor, Arakunrin Oluwarotimi Akeredolu, defaulters will face the wrath of the law and I want those affected to also know that this is in their own interest.

“This is part of what we call service to yourself and to your immediate environment.

“We have been telling you that when you see something, say something.

“This is one of the critical measures the Akeredolu-led administration is putting in place to ensure that our environment and the residents are safe.

“Security is no longer the business of Security Agencies alone, it is now a collective responsibility and that is why we are encouraging all citizens in charge of public places like Churches Mosques, supermarkets schools hospitals and even all government institutions to install the CCTV camera.

“Following the epileptic power nature at the moment, we encourage them to use the solar powered ones which will guarantee them 24 hours coverage.

“Like I have always stated, trouble does not knock at your door before it comes and since you don’t know when it would come, the best is to be covered when it comes,” he advised.