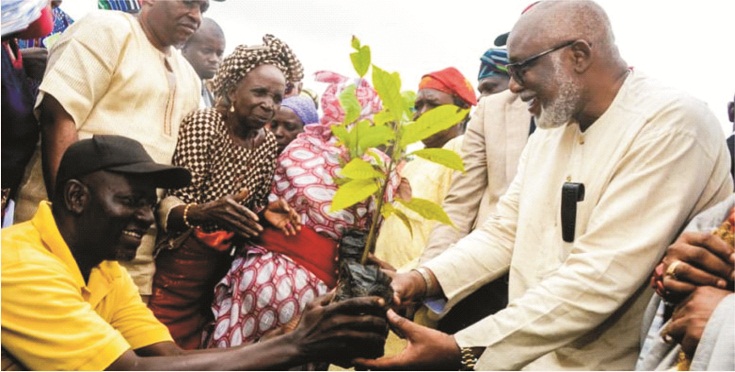 By Bisi Olominu
|
Nigeria is the fourth leading producer of cocoa in the world,while Ondo State is the largest producer of cocoa in Nigeria. Cocoa is the main agricultural export after petroleum, but quite a pity state, cocoa is now going through  declining that  yielding  to inconsistent production patterns, disease incidence, pest attacks and little agricultural mechanism.

Other challenges facing cocoa production are the decreasing level of labour force, lack of improved seedlings,high numbers of  rehabilitated trees, aging farmers,low level of investment in the industry and bad weather.

To stem the spiraling downward economy of the state, and as a boost  to improve the economy of Ondo State,  the state Governor, Arakunrin Oluwarotimi Akeredolu initiated cocoa rebirth to restore the lost glory of the agricultural product which the late sage, Chief Obafemi Awolowo used to revolutionise the fortune of the Western Region when he was the premier of the Region.

In boosting  and restoring the  fortune in Ondo State, Arakunrin Oluwarotimi Akeredolu had distributed 450,000 improved and  quality cocoa seedlings to farmers in the state that within 18 to 24months would have matured for harvest instead of the normal  three years.

The hybrid will bring great relieve to farmers, great investment to the state and more revenue to the purse of the  State.

Speaking while distributing the seedlings to farmers, the state Governor, Arakunrin  Oluwarotimi Akeredolu disclosed that the cocoa seedlings are of high yielding and tolerant to harsh weather conditions.

He said the cocoa seedlings distribution exercise was a prelude to the big event which would attract all major actors in the cocoa value chain to a roundtable with a view to positively preferring workable solutions to the retrogressing fortunes of cocoa in the state.

His words: ” I wish to also emphasize  that the good quality of our Cocoa seedlings brought about the partnership of the state with the Federal government for the distribution of the hybrid cocoa pods to all the cocoa producing states in the country.”

The Governor maintained that the state as an agrarian one produces all foods and tree crops available in the country, noting that the state does not only produce but occupies the number one position in the production of casava ,plantain and most importantly cocoa.

He added that cocoa is number one cash crop in Nigeria and the second largest foreign exchange after petroleum, but noted that recently the country slipped from a global fourth position to seventh position, with an annual production of 190,000mt.

The Governor added that five of the ten functional cocoa factories and all the development agencies working on cocoa across the country are based in the state, saying that the state is home to the first 100percent cocoa powder beverage, the Oluji Pure Cocoa Powder.

Akeredolu said that his government had embarked on the rehabilitation of old and moribund cocoa farms while also venturing into new plantation development and a good example was the resolved to establish the 2000 hectares model cocoa farm at Ijugbere Camp,Ilela via Owo.

“We encourage our farmers to engage in the cultivation of cocoa because of its high yielding productive value.

” Ondo State is not only mindful of increased output in quantity but also in quality. We have produced premium cocoa beans at the Oda Cocoa Farm which have been used in producing the award winning 70 percent Oda Single Estate Chocolate Bars.

” Hence our venture into chocolate production at the Sunshine Chocolate Factory,Alade Idanre which this administration is currently rejigging in capacity and operational mode.

“We are embarking on massive training of our cocoa farmers in modern technology and principles of cocoa production coupled with the use of modern fermentation and sun drying equipment.

” We are promoting local consumption of cocoa and chocolate drinks through sensitisation of our citizenry on the health and wealth benefits of cocoa”.

Arakunrin Akeredolu expressed his view that cocoa and chocolate would be incorporated into the national School Feeding Programme, while the distribution of 450,000,cocoa seedlings was deliberately targeted at the rehabilitation and replanting of the various plantations in the state .

” It is also worthy to mention that poor access roads,lack of drinkable water,poor accommodation, poor electricity,lack of telephone and internet services, among others,are attributable to why many of our youths are not showing interest in farming

“Our government intends to resolve these problems at our 2000Ha Model Cocoa Farm in Ijugbere which endear our youths to the farmstead and thus curb the rural-urban drift”.

Also speaking at the occasion, the Senior Special Assistant(SSA) to the Governor on Agriculture and Agribusiness, Pastor Akin Olotu described the exercise as massive and unprecedented in the history of the state.

“For a government to distribution 450,000 seedlings of cocoa in the state is massive. The multiplier effect is that cocoa harvest will increase in the state and old cocoa trees would give way to a new hybrid that will not take long to germinate”.

He described the move as one of the state government’s strategies to give Cocoa a new lease of life in the state.

Akin Olotu added that there was urgent need to revamp cocoa in the state, noting that the governor has led the way for farmers to follow

In his words at the occasion, the President, Federation of Agric Commodity Association of Nigeria(FACAN) and Chairman, Board of Council,Cocoa Association of Nigeria, Dr. Victor Iyamah decried the retrogression of cocoa production in Nigeria which he said would serve as a.means of job opportunities for the youths in the agriculture sector.

He challenged government at  all levels to strive towards achieving,if not 1million tonnes,then very close to that with a view to reclaiming its position as one of the leading cocoa producers in Africa.

In his words at the occasion, the President, Sunshine Cocoa Association, Engr. Julius Ogundare described the government gesture as unprecedented .

He added that government should continue to help farmers to achieve their aims of making life easy for the populace by giving them good and high yielding crops.