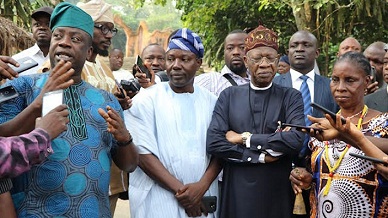 From Fisayo Akinduro, Osogbo
|
Ondo State has been listed as part of country’s cultural sites to be enlisted as UNESCO World Heritage Sites.

The Minister of Information and Culture, Alhaji Lai Mohammed, disclosed this yesterday in Osogbo during his visit to some cultural sites in Osun  state capital.

“As you are aware, Nigeria has many veritable sites that meet the requirements of being declared World Heritage Sites.

We are taking immediate steps to first enlist the sites on the Tentative List, after which they can be inscribed as World Heritage Sites,” he said.

According to the minister, some of the sites being considered for World Heritage Site designation are Kano City Walls, the Brazilian Baracoon Museum/Point Of No Return in Badagry, Lagos State, and the forests in Oke-Igbo, Ile Oluji Axis of Ondo State, which was the inspiration for D. O. Fagunwa’s book, ‘Igbo Olodumare’.

Others are the Gashaka-Gumti National Park, Nigeria’s largest national park which is located in the eastern provinces of Taraba and Adamawa, close to the border with Cameroon, and the Ogbunike Caves in Anambra State.

The Minister paid the state Governor, Gboyega Oyetola a courtesy visit after the tour.

Oyetola in his address reiterated his administration’s readiness to partner with the Federal Government to develop Osun tourism sector to further boost the State’s Internally Generated Revenue, IGR.