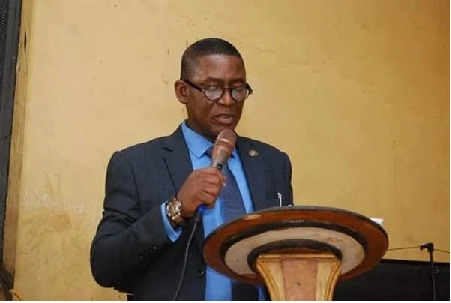 Placement examination for primary six pupils and promotion examination for Senior Secondary School two students in Ondo state would be rolled out soon, it has been disclosed.
The Permanent Secretary of Ondo State Ministry of Education, Science and Technology, Revd Akin Asaniyan made the disclosure yesterday when he monitored the ongoing Junior Secondary School three examination in the state in Akure.
Asaniyan who stated that the state has its academic calendar and would not rush into opening schools noted that the two exams would be rolled out after the ongoing JSS3 exam has been completed.
While speaking on when schools would be fully opened in the state, the PS said reopening is mandatory adding that there was the need to take precautionary measure because the pandemic is in the air.
“Just like the commissioner has reiterated severally, we are not going to be stampeded into rushing our students back to school. The pandemic is deadly because it is more in the air unlike when it first started.
“The more cluster of people, the more dangerous. We have our calendar. So after this, the primary six placement and SS two examinations will be rolled out”, he stressed.
Giving his assessment of the schools visited, the Permanent Secretary said the preparation was impressive enough. He added that the report from other local governments monitored through the ICT platform of the ministry was encouraging too.
According to him, they are a far improvement from what happened last year despite the challenge of COVID-19.
When the team visited Winners College, Fanibi, Ondo road, the Permanent Secretary expressed his displeasure over what he described as abysmally poor preparation of the school for the exam as students were seen running up and down without their nose masks.
Asaniyan who said government will not condone that, mandated the school principal to report at the ministry’s headquarters for proper briefing on what to do or bear the consequences.
“Government cannot condone this. We can’t see water anywhere, students are just rushing to wear their nose masks, the founder has no mask on him. This is poor, they are not complying. If he doesn’t come for briefing on what to do, question papers will not be brought to them and the students will be evacuated to the nearest school to write the exam”, he said.
The monitoring team’s first port of call was African Church Comprehensive High School, Alagbaka where the students were writing English language. The students were seen with sanitizers on their tables with their nose masks on them.
Also, buckets of water were seen in strategic locations within the premises in adherence with COVID-19 guidelines in the state.
The team also visited Fiwasaye Girls’ Grammar School where 688 students are writing the exam in total compliance with COVID-19 precautionary measures.
The Principal of the School, Mrs Taye Bola said the exam started at about 10:25am and attributed the delay to the need to spacing the students adding that two halls and two other classes are being used to ensure social distancing.
At Oyemekun Grammar School where 611 students are sitting for the exam, students were seen with portable sanitizers on their table and their nose masks on them.
Acting Principal of the school, Mrs Vera Agbetuyi noted that two halls and 12 classrooms are being used adding that the school mandated all students to come with portable sanitizers and their nose masks while water and soap were made available for hand washing.
The Principal of St Peters’ Unity Secondary School, Akure, Mrs Feyisayo Busari said 156 students are sitting for the exam noting that the school hall was big enough to contain them adding that they were able to space them adequately and also obeyed all other precautionary measures.

‘Most of our members couldn’t access FG’s survival fund’