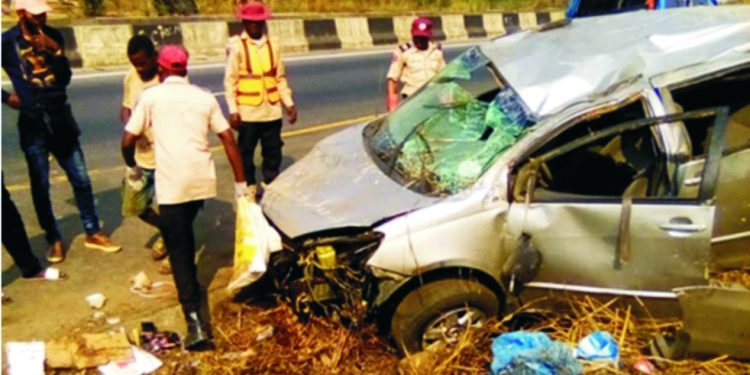 One person has reportedly died, while five other persons were injured in a lone road accident that occurred at Ijebu Ode-Ore route, along Ore-Lagos expressway in Odigbo Local Government area.

However, what could have resulted to another tragedy was averted as two persons whose identity was yet unknown, escaped death in a motor accident on the same road.

The Hope Metro gathered that the first accident which involved a Sienna car with number plate BLA820AG, was caused as a result of tyre bust while the driver was on top speed.

Speaking with our correspondent in a phone call, The Ore Unit Commander, Mr Sikiru Alonge confirmed the incidents.

Alonge said both crashes were  caused by over speeding, which led to tyre burst while on motion

“The second accident which involved a vehicle with no number plate was burnt beyond recognition with items, like bottles of perfumes and body spray it conveyed

He said two male adults were involved in the accident, while one male adult was severely injured.

“Diversion of Vehicles was carried out by some personnel to eschew secondary crash.

He said the Injured victims has been  taken to the nearest hospital for immediate treatment, while the corpse of dead victim has been deposited at the morgue.