‘Only private investors can drive the agricultural sector’ 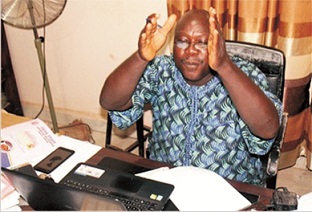 ‘Only private investors can drive the agricultural sector’

Prof Ahmed Adedoyin Balogun is a rice farmer who also coordinates a cooperative group that provides financial support to farmers. He is also the head, Department of Meteorology and Climate Science, Federal University of Technology, Akure. In this interview with SUNMOLA OLOWOOKERE, he harped on the need for private investors to invest in agriculture in order to stimulate Nigeria’s economy.

With the closure of Nigeria’s border against importation of rice and the scarcity of foreign rice, what has been the fortune of local rice producers?

The development has improved their livelihood in that they now have more market for their products and even local processors have more businesses brought to them. Most people who left rice farming before because it was not lucrative are now going back into the business. The problem now is lack of finance to support these people and boost their production.

All the noise that we hear on radio and television has not really translated into increased support for the real farmers.

Some people are saying that the president banned foreign rice. He did not ban it. He only closed the border so there is restricted access. That is why you can see the policy having the effect that they want.  The policy is that if you want to import, do it through the window that the federal government has allowed.

But most people want to do it the other way  which the government has closed.

Now that the table has turned in favour of local rice farmers, those that don’t have access to financial aid are not  finding it easy. Some do not even have bank. The groups that are reaching out to farmers are not allowed to get to them as some people in government hijack those funds.

It is not only in rice farming but in cocoa, cassava too.

But people already envisaged a dramatic change in the fortune of local rice farmers.

The problem is that the dramatic change people are expecting in the fortune of rice farmers will not be spontaneous. You see, it is money that drives agriculture; whether small scale or large scale. If the finance is not there, then they cannot function optimally. The farmers are pro-poor. They are small scale subsistence farmers. And so, for them to really make it, their source of finance must change.

Take for instance, a farmer that uses one hectare to cultivate from his own meagre resources and may get 1.2 tonnes per hectare and they say he is planting rice. Whereas the farmer should get 4 tonnes per hectare if only he had the financial support to do it on that same land. That is about 300 percent. So they are losing. That is why the farmers are poor. The support is not there at all.

As the festive season approaches, do you think these farmers will be able to meet the level of demand of the people for rice around that se.ason?

Haaa….this year, maybe not. But next year definitely, they will be able to make it. You know our people. The way we do things is that everyone sees an opening, a business idea, everyone rushes into it, then they could not sell it and  there was a glut. Look at what happened during the cassava glut. Then we have cassava flour, cassava bread etc. Every one planted cassava then. Then, they could not get market for it.

There are two ways to it; if only private investors will pick up the challenges that government agencies cannot handle, there would be a difference. Why is it that it is only foreign investors that invest in Nigeria? Our people should look into how they can assist farmers so that they would be ableto produce food. They can form cooperative groups and present a certain amount of money that they would set as a target to be sourced for. By this, they would be able to help the small scale farmers.

Everyone is dependent on government and as the government is not forthcoming, everything is at a standstill.

Do you foresee change in the scheme of things any time soon?

This year is gone already. They cannot plant anything without irrigation. This is October, rice would take four months. So if you plant now, you will count October, November, December and January. It will not be available until January.

What do you see to this persistent rain  falls as it affect cash crops?

This rain will stop by November, December. So the rain will stop very soon and unless you have irrigation we can not plants. So, how many people can afford irrigation? This is where we are not thinking. This is where the private investors come in. Unfortunately, they are not paying attention to this area. Irrigation is an area people should invest. When someone invests in irrigation, another person will invest in seedlings, another person provides the labour. Someone else provides the land.

Everyone makes money and the farmer goes home happy. The investors go home happy. The people consuming the rice are happy. And we will be stimulating the economy.  But no, we will not do that. It is only one person that wants to own everything.

Now that everyone is buying local rice, how are local rice producers planning to meet people’s demands?

I aggregate rice farmers. Normally our rice finishes in February but we have pushed it to July. Now we’re trying to see how we can push the rice till December for the festive season. Even with that, we are still scratching the surface.

To get our people to invest in agriculture funding is so difficult. People are not investment conscious here. All they do is look for easy opportunities. They seek contracts that they might not execute at the end of the day.

They lobby people that they know in government for one favour or the other. They seek political appointments so that government will be paying them.

We are not sitting down to reason that if I invest this amount, this is the profit that will accrue to me. We are always looking for free money. That is it. That is why we are not growing. That is why foreigners will come here and make it and they will come here in jeeps and go back in private jets.

Are people now patronizing local rice as you expect?

They are patronising us but it is not enough.

What are you doing to make your product competitive in the rice market?

See, currently they don’t have the capacity. It is people like us that can do it for them. What we do is we  supply the seed for farmers. We buy it off them and process it, destone it and package it for them. We have rice produce that are planted by farmers in Akure here. So it is private investors that can drive this sector, not government. They will say they will do it but they won’t.