PUBLIC universities in Nigeria have remained shut for over two months now following the industrial action embarked upon by staff unions of universities over the alleged failure of the Federal Government to fulfill its own part of the agreement it reached with the university bodies in 2009.Thus, students and their parents have been left to bear the brunt while the government and the unions tango in a seeming unending rift.

WHILE  downing of tools is not new in Nigerian universities, the current impasse between the Federal Government and the university unions began when the National Executive Council (NEC) of the Academic Staff Union of Universities (ASUU), after its meeting in Lagos from February 12 to 13, 2022, declared a four-week total and comprehensive roll-over strike.

FOLLOWING an emergency meeting of the NEC in Abuja on March 13, 2022, ASUU extended the strike by eight weeks, citing that the FGN did not treat the matters involved with utmost urgency during the first four-week strike. The union claimed that government failed to “satisfactorily” implement the Memorandum of Action (MoA) it signed with the Union in December 2020 on funding for revitalisation of public universities (both Federal and States), renegotiation of the 2009 FGN/ASUU Agreement and the deployment of the University Transparency and Accountability Solution (UTAS).

OTHER demands of the union, as listed by ASUU, include Earned Academic Allowances, poor funding of State Universities, promotion arrears, withheld salaries, and non-remittance of third-party deductions and the release of the reports of visitation panels to federal universities.Similarly, there has also been an impasse between ASUU and the National Information Technology Development Agency (NITDA) over the practicability of UTAS being proposed by the lecturers as a mode of payment. NITDA claims that UTAS failed the integrity test the agency conducted, while ASUU disagrees with that claim.      According to media reports, though the FGN has constituted a committee, led by a former Vice-Chancellor and Emeritus Professor of Obstetrics And Gynaecology, Nimi Briggs, to renegotiate the 2009 agreement with all the university unions within three months, ASUU has said it has nothing more to discuss on the agreement but  its implementation.

AS if to complicate the matter, Non-Academic Staff Union of Universities and Allied Educational Institutions (NASU) and Senior Staff Association of Nigerian Universities (SSANU), under the umbrella of Joint Action Committee (JAC), have also joined in the strike. On March 28, 2022, JAC directed all its members to embark on a two-week industrial action which it extended on April 13, citing that the FGN failed to address issues that led to the strike initially. In a letter dated March 16, JAC had accused the Government of insincerity in its implementation of the Memorandum of Understanding (MoU) and Memorandum of Action (MoA) it signed with the union in October 2020 and February 2021 respectively.

THE  strike was further extended by another four weeks on April 21, 2022. Meanwhile, members of the National Association of Academic Technologists (NAAT) had also embarked on a two-week industrial action in March.

THE Hope notes that keeping the gates of the nation’s universities shut for months while the floodgates of political activities are open is not the best for our country. It constitutes both social and security risks.As we speak, critical stakeholders in the impasse from government side who are leading the negotiation: Minister of Labour, Employment and Productivity, Chris Ngige and Minister of State for Education, Chukwuemeka Nwajiuba have declared interest in running for the post of president in 2023 polls and are busy  pursuing their ambition making the current crisis in Nigerian varsities a secondary matter.

WE  are of the opinion that government should consider the future of our teeming youths and make education a priority by providing more funds for the ivory towers and other institutions of higher learning in the country.

WHILE  we are not oblivious of the fact that meeting the unions’ demands is capital intensive on the part of government giving the dwindling economic fortunes, we dare say that any financial sacrifice to rescue the higher education in Nigeria from imminent collapse is worth it. This is more so that ASUU has consistently insisted that government has the resources to adequately fund education but has failed to do so due to misplaced priority and wastage. The union has come out to tell Nigerians that it has identified several leakages in government spending and advised it on possible ways of blocking the loopholes but government has turned deaf ears to this.

THE Hope is of the belief that while the internal conciliators seem to have failed, the federal government and the unions should consider the option of bringing in external conciliators to mediate in the crisis. There are several options government can explore in this regard rather than threatening a legal action which can only prolong the impasse.  We also call on the Nigerian Labour Congress (NLC) to, rather than threatening a solidarity strike, be more proactive in getting the government to act before this matter gets out of hand. 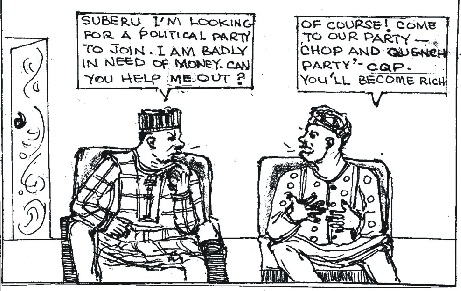